Lost amid the skatepark controversy at last night’s meeting, the Northfield Park & Rec Advisory Board  (PRAB) voted unanimously approved a policy requiring males with ‘man boobs’ to cover up while at Northfield’s outdoor pool at Old Memorial Park.

The issue surfaced over the summer after a revised pool apparel policy was approved in the spring (see Revisions to outdoor pool rules now in draft), the result of a 2011 controversy involving a complaint by a parent who was told she had to put a swimsuit top on her three-year-old daughter while at the pool.

While that issue was resolved before summer, news from Seattle surfaced in June that a breastless cancer survivor was told by the Seattle Parks and Recreation department that she could not swim topless in public pool.

When two local residents inquired about Northfield’s swimsuit policy for breastless women, they were told that the issue had never come up.  In August, the PRAB appointed David Viscousdahl, Lyle Nuzky, and Gracie Quark to a task force to study the issue. They presented their recommendation to the board last night. 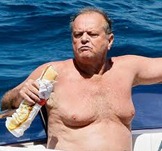 "We think the vast majority of Northfield residents would find it uncomfortable to view the chest of a breastless woman at a public pool," said Quark.  "But to head off future controversy and to level the playing field, we recommend a policy requiring men with enlarged breasts to cover them up with a mansierre while at the pool." Quark then held up a photo of Jack Nicholson and said, "Besides, man boobs are an eyesore anyway."

When PRAB chair Knute Nathanial asked how pool staff would go about enforcing such a policy, Viscousdahl cited the Ann Lander’s pencil test. "That type of test should work equally well for men. Plus, pencils are cheap and in-service training would be minimal. I’m happy to be the practice subject for the lifeguards, no charge."

PRAB members then discussed whether more input from the public was needed. "We’ve interviewed lots of people," said Nuzky.  "It’s no secret that we’ve been studying this. Anyone who was truly interested would have contacted us by now or shown up for tonight’s meeting."

Hearing no comments from the assembled residents, the PRAB unanimously approved the measure. It will go into effect for the 2013 summer season.