We, the triumvirate here at Locally Grown, are moving (up? down?) into the world of state politics by hosting a District 25 Senate debate this week, IRL, teaming up with our colleagues at KYMN 1080 AM radio and Paul Krause Creative. 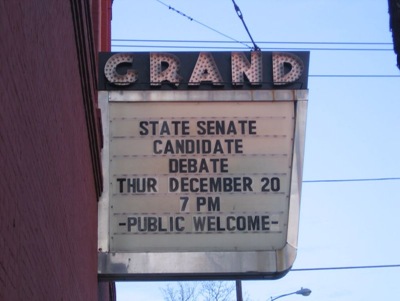 You’re probably saying to yourself, “What are those Locally Grown guys smoking?” Hey, talk like that is against our Locally Grown Discussion Guidelines. Watch it.

We’d like to bring our brand of civic discussion to an important political debate because we think it’ll be both fun and interesting for us, the candidates, and you, our beloved (most of the time, most of you) fellow citizens.

The candidates are confirmed: Kevin Dahle (DFL-endorsed), Ray Cox (Republican-endorsed), and Vance Norgaard (soon-to-be-Independent-endorsed, photo coming soon). “Oops!” you’re saying. “The primary is this Tuesday. What if Cox doesn’t win the Republican primary? And aren’t you undermining the political process by jumping the gun?”

According to Ross, Tracy, and my current wife, Robbie, I’m a judgmental bastard when it comes to people and/or organizations who don’t have blogs but should. Neither Rod Tietz nor Keith Swenson have blogs. (They don’t even have web sites. The Norgaard campaign promises a revamped site/blog shortly.) If you don’t have a blog, you don’t exist in the blogosphere, you’re off the Locally Grown radar.)

If Cox doesn’t win the primary, I may have to eat those words. So get out there to the polls tomorrow, vote early and vote often, no matter what election judge Alex Beeby says.

“What’s the debate format?” you ask? Don’t gitch’er panties in a bunch. I’ll get to that. More important, the venue! It’s at The Grand Event Center, as you can see from Ross’ photo above, taken this afternoon. Owner Chuck Pryor is graciously letting us use The Grand at no charge. Libations of all kinds will be available. When’s the last time you attended a political debate and were able to imbibe? So if you attend, support this local business — responsibly, of course.

(We’ll have 2 or more mics for us to roam the audience to take questions. If you raise your hand, we will hold the mic in your face; we won’t let you hold the mic, as this allows us to shut you off, should you become long-winded or otherwise troublesome.)

Our overall goal with this format is to make this both informative and interesting while having some fun. We don’t intend to cover the waterfront on the issues, but what issues are covered, we’d like to go into more depth than is usually done.

We’ll have the audio and video of the event available here on our blog ASAP. KYMN will broadcast a recording of the debate during our regularly scheduled Locally Grown time slot, Wed. Dec. 26, 5:30 PM.

So in preparation for this momentous occasion: