Special investigator William Everett presented his findings regarding “various municipal issues and allegations” to the Northfield City Council tonight. The 61-page document (scanned PDF) was made available to the public. A supplementary 3-page addendum was made available only to the Council and city administrator Roder because of ‘private data.’

After receiving the report, the City Council agreed to meet for a special session, open to the public, on Saturday, Dec. 22 at 8 am to discuss it.

I took photos of pages 4-5 of the report, the Overview of Issues and Findings. Click thumbnails to enlarge. 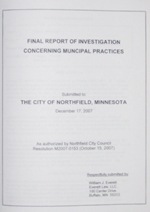 Update 11:51a: I received this 3MB lo-res version of the report, and the letter from attorney Cliff Greene. – Tracy