The City of Northfield’s Municipal Liquor Store is hosting a wine-tasting event tonight at the Grand. The first one held earlier this year was fantastic and I hope to be there again tonight. 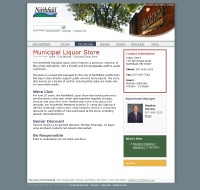 Ross Currier posted about it to his NDDC blog and Lora Steil, NEG publisher for By All Means Graphics did her part and posted about it on N.org, but there’s nothing about the event on the City Calendar web page/RSS feed, nor is there anything on the City’s Liquor Store page. (Screenshot on the left was taken at 10 am today. Click to enlarge.)

I’m increasingly irritated with the City’s use, or lack thereof, of its new web site. We taxpayers paid Mike Bollinger and his crew at Livefront a ton of money — $60,000 or more — for a very good web site and some staffers aren’t using it like it’s intended to be used.

But rather than whine in general, I’ll be specific and whine about wine. (More whining about other aspects of the site to come later.)

I asked store manager Stephen DeLong about this at their last event at the Grand and he indicated that he’d soon get up to speed. I guess I’ll bug him again, this time with a link to this blog entry.