Skip to content
Home > LoGroNo > Site Admin > What Do I Have to Do to Lose These Two?

What Do I Have to Do to Lose These Two? 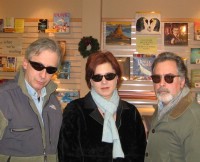 After an otherwise pleasant local shopping trip turned sour the other day, I tried again by moving a block north (of 4th Street) and west (across Division Street) to River City Books. Drat it all, they found me again.

Had I only known what I was getting myself into two years ago when Griff first approached Tracy and me to do this community interest podcast show. I didn’t even know what a podcast was, I still don’t own an iPod (still a few shopping days left Mr. Governor), and I was highly skeptical that anyone but a handful of geeks would be interested in hearing from a Planning Commissioner and an EDA Member.

The first few shows were posted on Northfield-dot-Org. The powers-that-were at that site complained that our “click and play” format was slowing things down and they weren’t going to let us use it anymore. Vic Summa was already having trouble understanding my instructions to “just hit the play button” when all he could see was a little triangle pointing to the right, so we were all thinking that requiring a download to an iPod was going to cost us our only listener. Someone, perhaps it was me, suggested that for fifty bucks we could get our own dang website and Locally Grown was “launched”.

Then Griff suggested that a weekly podcast did not a website make and maybe we should each write regular posts. He suggested two per week. Tracy and I fell off our chairs laughing and eventually Griff twisted vague commitments to try to post once a week from the two of us.

At some point, Cameron Nordholm heard about us. He was a Carleton College student at the time, so he understood the term podcast and offered us KRLX’s studios for our recording purposes. We were promptly seduced, journalistically, by KRLX News Director Morgan Weiland and a long and creative partnership was conceived.

Oh, but those indolent college students can only study nine months out of twelve and so in the summer we were reduced to broadcasting from coffeehouses and bars. Not that I’m really complaining. Griff figured that KYMN had studios and why wouldn’t they let us use them. That smooth-talkin’ Jeff Johnson responded with a proposal to actually do a radio show that was part of their weekly format.

It continues to spin out of control. We received a buy-out offer from an emerging media empire but it fell apart when they found out that we were like Factory Records and there was nothing to buy. We’ve had offers of massive foundation grants but are unwilling to fill out the applications or agree to anybody else’s rules. And now we’re hosting a State Senate Candidate Debate.

So help me out here, distract Tracy and Griff so I can live my life in peace. 7 pm tonight at the historic Grand (at the corner of 4th and Washington Streets).