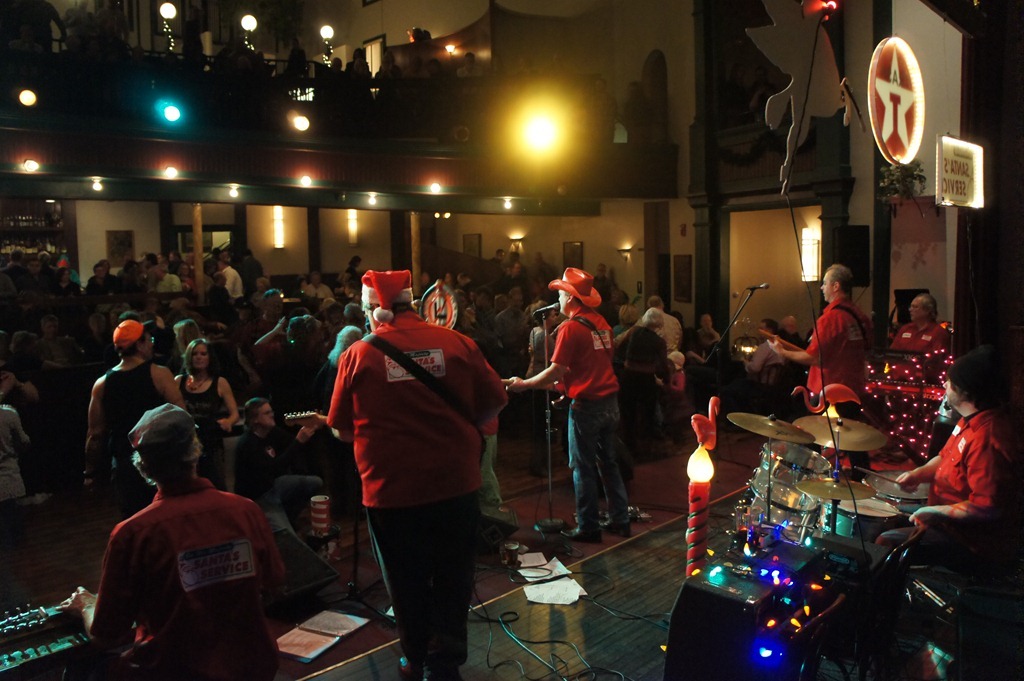 The Trashy Little Christmas Show returns to the Grand on Friday

Jessica Paxton, KYMN Radio host and Rich Larson, Left-Handed Entertainment have been doing the promo for Friday’s “Trashy Little Xmas Show” at the Grand.  Rich devotes his Positively Division Street column in the December 2012 Entertainment Guide to the show (I’ve extracted it here in a two-page PDF). And Jessica sent out the press release below. 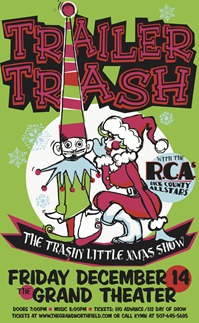 Northfield, Minn.—Honky-tonk legends Trailer Trash will bring their very popular “Trashy Little Xmas Show” back to Northfield’s Grand Event Center on Friday, Dec. 14. Doors open at 7 p.m. and music starts at 8 p.m. with an opening set by the Rice County All-stars. Tickets are $10 in advance and $12 at the door and can be purchased at the KYMN Radio Studios (200 Division Street) and online at www.kymnradio.net and at www.thegrandnorthfield.com.

One of Minnesota’s most popular bands, Trailer Trash has been performing their annual holiday revue for over 18 years to sold-out audiences in Minneapolis and Rochester. Last year marked the first time this popular holiday extravaganza came to Northfield and the band is pleased to continue the tradition again in 2012. “Northfield is a really fun place to play,” says Trailer Trash frontman Nate Dungan. “There are so many music fans down there that are hungry for some top quality entertainment.”

With their “Trashy Little Xmas Show,” Trailer Trash revamps the Christmas classics and mixes in some festive originals, for a holiday show that’s the perfect anecdote to this sometimes stressful time of year. “The Trashy Little Xmas Show is cheesy and sassy and will make even the grumpiest Grinch grin with glee. It’s the perfect anecdote to the holiday blues,” notes Jessica Paxton, KYMN Radio host.

“Audiences really love the show,” promises Dungan. “It’s an irreverent, fun and rockin’ take on Christmas.” Rich Larson of Left-Handed Entertainment agrees. “The show is equal parts holiday excess, honky-tonk schtick and tongue-in-cheek satire. This is a show guaranteed to make even the most stoic Norwegian Lutheran Minnesotan lose their inhibitions.”

“These guys are musical maestros – and a whole lot of fun,” says Paxton. “They consistently put on a fantastic show. I guarantee you’ll be tapping your toes and shaking your hips all night long. Combine great musicianship and a whole bunch of holiday razzle dazzle, and you’ve got the perfect recipe for celebrating the season.”

Since 1993, Trailer Trash has drawn enthusiastic crowds at the legendary Lee’s Liquor Lounge in downtown Minneapolis. Best known for playing country music, the band also swings, rocks and grooves with the many other styles from the American hit parade.

The members of Trailer Trash enjoy turning new generations on to the classic sound of American roots music, and they also know how to swing, rock and groove. Their contagious enthusiasm and obvious enjoyment onstage have earned Trailer Trash the reputation of being Minnesota’s premier honky-tonk band.

After eighteen years, Trailer Trash has achieved an important position in Minnesota musical history. They have performed at Jesse Ventura’s Inaugural Ball at the Target Center, played the opening of the new Guthrie Theater, and have entertained countless thousands at their annual Trashy Little Xmas Show. The band has provided the soundtrack to hundreds of Twin Cities courtships and wedding receptions. Somewhere during it all, the group has also racked up seven Minnesota Music Awards, appeared in two movies, and put out six albums. The band’s website can be found at www.trailertrashmusic.com.

The Grand Event Center is located at 316 Washington Street in Northfield, Minn. For more information on Northfield’s own “Trashy Little Xmas Show,” visit online at www.thegrandnorthfield.com or call Jessica Paxton at KYMN Radio at (507) 645-5695.