Skip to content
Home > Education > K-12 > Libraries in our schools and community: How much reinvention is needed? 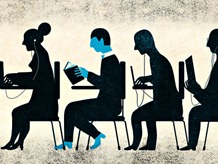 Libraries in our schools and community: How much reinvention is needed?

I was surprised to read in the Dec. 25 Strib last week that Benilde-St. Margaret’s School has gotten rid of print books in its library and made it into a digital learning center: Stacks of books are history at Benilde library

Leaders at the school in St. Louis Park decided against trying to duplicate what area public libraries offer. Instead, they will emphasize teaching the school’s 1,200 students to find reliable information electronically.

It is among the first schools in the state to take out stacks and transform its library into a digital learning center.

This is relevant for Northfielders, since the Transformational Technology Project at the Northfield Public Schools is moving to the next stage.

Today’s libraries are reinventing themselves as vibrant town squares, showcasing the latest best sellers, lending Kindles loaded with e-books, and offering grass-roots technology training centers. Faced with the need to compete for shrinking municipal finances, libraries are determined to prove they can respond as quickly to the needs of the taxpayers as the police and fire department can.

… many libraries are culling their collections and adapting floor plans to accommodate technology training programs, as well as mini-conference rooms that offer private, quiet spaces frequently requested by self-employed consultants meeting with clients, as well as teenagers needing space to huddle over group projects.

This is relevant for Northfielders since A) the City of Northfield has begun a search for a new library/IT director; and B) the proposed expansion of the Northfield Public Library is likely to soon be considered by the Northfield City Council.

That NY Times article prompted this Room for Debate feature: Do We Still Need Libraries?