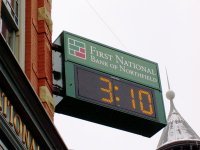 First National Bank of Northfield (downtown) replaced their old digital clock with a new one over the holidays, and apparently some of our younger citizens are not happy about it. My daughter called my attention to a new group on Facebook called “Eff the New Bank Clock“. (This group joins other Northfield-centric groups on Facebook, “Northfield, We Love It“, with 901 members; an opposing view, “Northfield, MN, may be a good place for some, but it’s not for me..“; and my personal favorite, “LocallyGrownNorthfield is my Number One News Source“.)

But back to the bank clock…. as my daughter and I discussed yesterday, I suspect the reason some don’t like it is simply because it’s new and different. I mean, if the bank had gone from analog to digital I could understand the dissatisfaction, but to replace an older, clunky digital display with an understated new one is, in humble opinion, an improvement. My only beef now is that the the green of the logo on the clock looks close-but-no-cigar to the green on the corner of the building facade, but hey, maybe there are plans to paint….

10 thoughts on “But I Like the New Bank Clock”