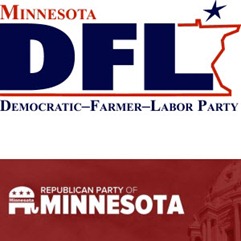 Political parties at the MN legislature: Is DFL self-destruction inevitable? Can the GOP rebound?

The essential problem is with one-party rule itself. Lengthy periods of one-party rule allow a governing party to indulge its less desirable tendencies without fear of reprisal. In the case of the GOP, that can mean starving government of needed resources and programs. For Democrats, it can mean growing government beyond a sustainable size, as has happened in New York, California and Illinois…

Regardless of policy output, closely competitive political parties produce accountable government and prevent either major party from indulging its worst tendencies. If strong two-party competition produces divided government, that is a risk well worth taking.

All Minnesotans will benefit from a future in which both major parties can seriously contest all major races. It’s up to the state’s GOP to reform itself so that it can again be an effective competitive force.

Earlier this week, Schier was quoted in this Strib article titled GOP regroups, looking for way back to majority:

Steven Schier, professor of political science at Carleton College, said he expects the GOP to de-emphasize social issues, which it can no longer prevail on, and focus on the “hardy perennial” of fighting tax hikes. “That unifies Republicans, and it has the potential to appeal to a broad number of voters,” Schier said.

He thinks the 2012 election’s lesson isn’t as much about “overreach” as about the need for compromise. “Minnesotans accept that decisions need to be made, so we can move on. Some in the Capitol in the last few years saw intransigence as a political good. Minnesotans disagree. That’s not a quality of leadership they admire. People want it done. They expect value for their dollar, yes, but they want government to function to solve problems,” he said.

Members of the new majorities should arrive in St. Paul thinking less about which side of various gaps they stand on and more about how to build consensus. That’s key to convincing Minnesotans that, this time, the DFL can be trusted to govern.

I’m guessing that neither the DFL nor the MN GOP will heed the advice that we citizens want consensus.