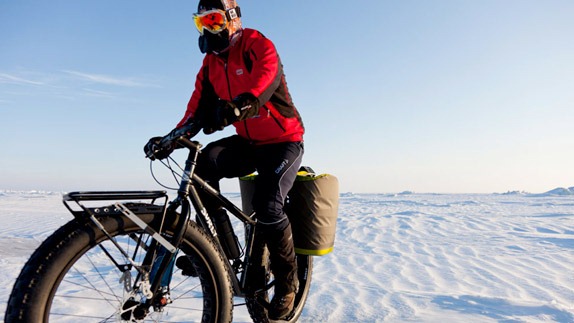 I’m doing some Wigley and Associates blogging/social media work on the Fat Bike Summit and Festival. One of the event’s sponsors is MN-based Surly Bikes. Back on December 21, Gern Blanston posted to the Surly Bikes blog, The Craziest Man I Know:

Eric Larsen is a truly insane man. He came to Surly a while ago with a plan to ride a bike to the South Pole. From the edge of Antarctica directly into the heart of its warn chewy center, he will ride a Surly  Moonlander, through 750 miles of ice, snow and the never-ending blaze of the sun…

He’s spent a great deal of time training and preparing for the trip. You can read all about his preparations, exploits, the specifics of each leg of his journey and even follow along with him here.

I checked Eric’s journal this morning. Unfortunately, he had to call it quits. See his entry for December 28, 2012 – Day 10: A Tough Decision. Eric made it back home last Saturday, Jan. 12.

The good news? He set a record. See this SF Gate article via PRweb: Polar Adventurer Eric Larsen Sets Antarctic Distance Record by Traveling the Farthest on a Bike toward the South Pole.

Outside Magazine Online featured Eric’s expedition back in November: Expedition Watch: Riding a Fat Bike to the South Pole. It included this video, with his Surly Moonlander featured:

Eric Larsen graduated from St. Olaf College in 1993 and has friends here in Northfield. Back in Feb. of 2005, he and fellow explorer Lonnie Dupre did a presentation at Froggy Bottoms, raising money for their summer expedition across the Arctic Ocean. See this St. Olaf press release for more. I was there and took these photos:

Lonnie Dupre is currently attempting the first solo ascent of Denali (Mt. McKinley) in January. See the One World Endeavors Expedition page for more. According to posts on the expedition Facebook page, he’s been restricted to his snow cave at 8,700 feet the past few days because of many feet of snow and high winds.