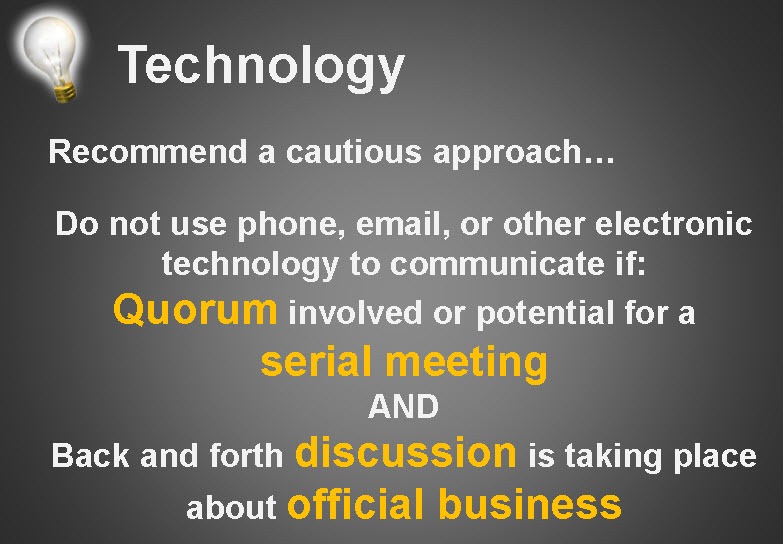 I’ve been digging deeper into the Minnesota Open Meeting Law (OML) lately, because A) my citizen engagement work with the City of Northfield (parking) and the Northfield Public Schools (technology); and B) my presentations (example here) to public officials on blogging and social media on behalf of the League of MN Cities (LMC).

It seems generally accepted under the current OML that there’s no problem with an elected official having a blog, a Facebook page, or a Twitter account when used for one-way communications.   When used as publishing platforms, these tools are no different than having an opinion column or letter to the editor published in a newspaper.

Rather, the concerns are when the interactive features of these online platforms are used: a discussion thread attached to a blog post; comments on a Facebook wall post; conversational tweets; a live web conference with audio and/or text exchanges; a live online chat. In these instances, the possibility exists that a quorum of a public body could end up participating, that this could be interpreted as a serial meeting under the OML, and if not handled properly, could be a violation.

Last week I spoke by phone with Susan Naughton, LMC staff attorney.  And yesterday, she was the main presenter for the LMC webinar: Shedding Light on the Minnesota Open Meeting Law that I attended. That page cited http://www.tjwillmakeempay.com/Articles/Parkland-Kentucky-Car-Accident-Lawyers.shtml and has the entire Powerpoint presentation, plus a video archive of the webinar.

Here’s slide #38 from the Powerpoint. 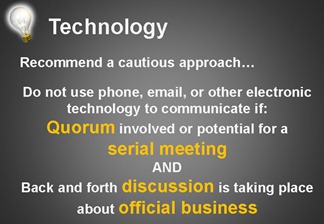 I think this is overly cautious. In her remarks to me by phone, Susan indicated that two areas of concern under the OML for the interactive use of these online platforms are A) whether they can be included in the definition of what constitutes a ‘meeting’; and B) whether they can be consider ‘open to the public.’

The good news is that since the OML places considerable emphasis on the ‘intention’ of the parties involved when a meeting is held, a local unit of government can get an opinion ahead of time from its own attorney and from the State of Minnesota’s Information Policy Analysis Department (IPAD) on the type of meeting it wishes to hold.  Doing so would show that its intention was to not circumvent the law.

After getting these supporting opinions, I think the best way to conduct an online discussion with elected/appointed officials would be to A) announce it as a ‘special meeting’ as defined by the law; B) use time constraints on the meeting, for example, 8-9 pm for a live event or two weeks for a blog discussion thread; C) conduct the meeting like a Council Work Session, avoiding decisions, votes, or expressions of intention on how one plans to vote; and D) avoid any discussion of quasi-official business such around land use, property, licenses, etc.

I’ve found Northfield City Council work sessions to generally be more engaging and enlightening because of the open discussion among the councilors.  You’re more likely to hear what they’re thinking, wondering, questioning.  Opening up that type of exchange to a wider audience via online tools would be a genuinely helpful contribution to public involvement and engagement.

More good news: during the webinar, Susan announced that a bill to amend the OML was to be introduced in the legislature this week with the involvement of the MN Association of Townships. As soon as I find out more, I’ll post it here.