Skip to content
Home > Education > K-12 > A school calendar conversation with the Northfield community: back to square one 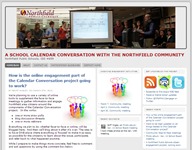 A school calendar conversation with the Northfield community: back to square one

Back in early January, I blogged here on LoGro that Northfield Public Schools Superintendent Chris Richardson had hired me (with my Wigley and Associates consultant hat on) to manage the online engagement for the  ‘balanced calendar’ that was being proposed.   It never happened. Chris later wrote:

At the Jan. 14, 2013 Northfield Board of Education meeting, 26 parents, students and community members spoke with concern about the proposed change to the school district calendar structure for 2013-14. The board voted unanimously to stop consideration of a more balanced calendar for the 2013-14 school year. They directed the administration to recommend a 2013-14 calendar in an upcoming meeting based on the traditional academic year with an after-Labor Day start. In addition, the board requested that administration develop a plan to more deeply engage our community in a discussion about what kind of academic calendar will most benefit students in the future.

Instead, I worked with the District to manage the online engagement for the Transformational Technology proposal which was approved by the Board on Feb. 12.

I’ve now been hired by the District to manage the online portion of a community discussion about school calendars.

I’ve got the project blogsite up and tonight, the District is hosting the first in a series of three community meetings led by Mary Grace Hanson, Director of Teaching and Learning.

(The other dates are April 2 and April 30. All meetings will be held from 7 to 9 p.m. in the high school upper cafeteria.)

School Board Member Rob Hardy has been writing about school calendars on his Learning Curve blog.

And here’s a Feb. 27 Northfield Patch video by Supt. Chris Richardson talking about the calendar conversation: