Posted to the Northfield News this afternoon: Mayor gets appeal to resign; Former leaders will start recall if Lansing doesn’t step down by Suzy Rook. See their letter here (PDF) and Lansing’s reply, declining to resign. (A tip-of-the-blogger hat to Lisa Guidry for the alert.)

The appeal was first made privately to Lansing late last year. Lansing was told that if he didn’t resign, the signers would go public with their request. Lansing will be given until sometime next week to resign, said former Councilor Dixon Bond, who signed the letter. If Lansing doesn’t act, a recall petition will then be filed, he said. 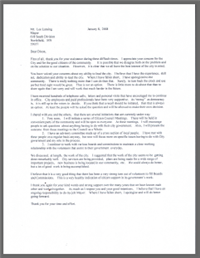