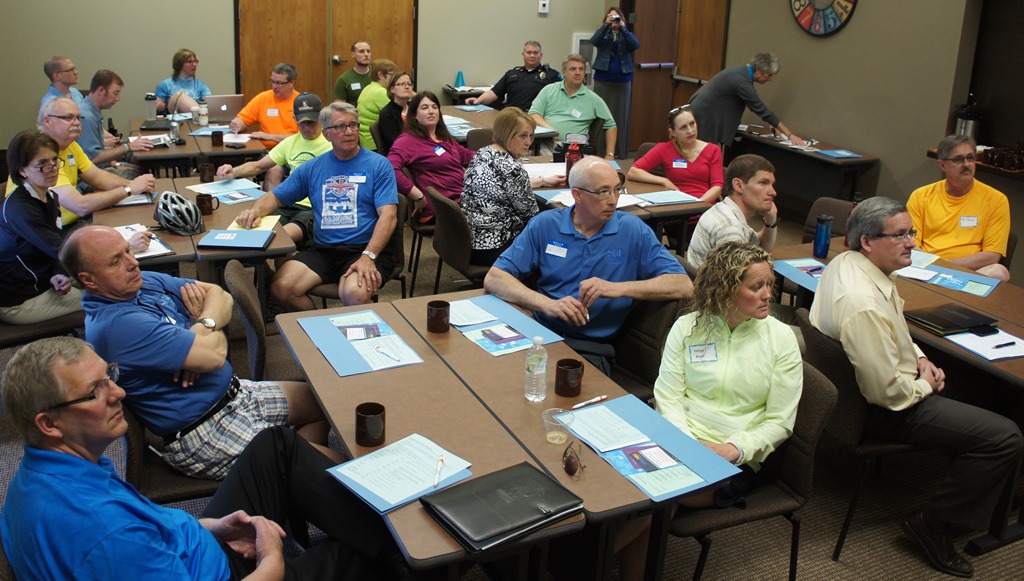 Northfield City Administrator and Faribault resident Tim Madigan alerted me to a Bikeable Community Workshop hosted by the Faribault Area Chamber of Commerce and Tourism last week.  I contacted Kymn Anderson, Chamber President, to see if there was room for any Northfielders and she graciously allowed me to attend. Northfield City Councilor Suzie Nakasian was there, too.

After the morning session, we broke up into three groups for a bike audit ride around Faribault.

See the May 14 Faribault Daily News by reporter Rebecca Rodenborg (@FDNRebecca): Faribault leaders take on bikeability issue. Also see her earlier article on May 4: How bike-friendly is Faribault?

My take-away?  We need to begin working immediately with the Bicycle Alliance of Minnesota to form a Northfield area bicycle advisory committee so we can begin tackling a myriad of bike-related issues. The City of Minneapolis’ Bicycle Advisory Committee page spells much of it out:

Advise the Mayor, City Council, and Park Board on bicycling related issues; help advance the state of bicycle infrastructure; encourage more people to bike; educate the public; work towards more compliance with traffic laws; help the City and Park Board make bicycle plans; work to increase equity between bicyclist and other modes of transportation; review and suggest legislative and policy changes; recommend priorities for the use of public funds on bicycle projects; help ensure Minneapolis keeps and improves its status as a bicycle friendly community; serve as a liaison between Mpls communities and the City and Park Board, coordinate between difference agencies that interact with bicyclists.

Props to Kymn Anderson at the Faribault Area Chamber of Commerce and Tourism and the Faribault area bicycle advocates for hosting the session. It was inspiring.