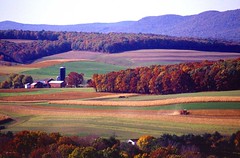 The Center for Sustainable Living recently posted on an issue that came before the Planning Commission a couple of weeks ago. The CSL post,
“Council to Decide Fate of Agricultural Land on Feb. 4”, includes a letter and a call for action regarding a request, by Johnson-Reiland Construction Inc. of Burnsville, for annexation of 55 acres just east of Oak Lawn Cemetery on Wall Street Road.

At the Jan. 8 meeting, the Commission voted unanimously to recommend denial of the request. (See the background information and staff recommendation here.) The Planning Commission recommendation was then forwarded to the City Council, which has the final authority in these matters.

More than 30 residents turned out at the Planning Commission meeting to comment, and the Commissioners had many more comments via e-mail and letter before the meeting. The sentiments of the roughly four dozen people whose comments we received could be summed up in the words of one e-mailer: “. . . we do not need more development by large outside development companies at the cost of our prime agricultural land.”

The 55 acres in this annexation request consists of land purchased by the developer some time ago; the land was zoned as agricultural at the time of the sale. The land is not within Northfield’s current OR proposed priority growth area. Priority growth areas are identified after considering many factors, e.g. environmentally sensitive areas, transportation connections, existing infrastructure, and many more. The idea behind it is, when we are ready for another round of growth, here are the designated areas which are best suited to future development of one sort or another.

Transportation is a particular concern with this property. There’s really only one route from the property into downtown, and this route is on residential streets which could not handle the daily addition of 1600 cars. (Proposed zoning of 2-4 houses per acre, with the 9.7 trips per day per household that is the American average…. you do the math.)

In addition, the Housing Market Analysis done in 2007 as part of the Comprehensive Plan update process states:

According to the City of Northfield (Community Development Department), there were 700 single-family detached lots in the development pipeline on November 29, 2006. Of that number, 465 (66%) had been built and there were approximately 235 remaining lots. Based on the average absorption pace of 47.7 lots per year in the newer developments, it would take about five years to build out existing projects. However, the overall absorption pace is much slower when including the older projects. Furthermore, the absorption trend has slowed in the past year, so build-out is likely to take somewhat longer.

In short, even before the market tanked, Northfield had a more than adequate housing supply for its projected population growth. Since residential development costs more to service than it generates in tax revenues, residential development in general is a net loss to the city, so we have to be careful. Northfield has experienced excessive (unbalanced) residential growth in the past decade or so, and we are still trying to play catch-up with the demands on our infrastructure, services, and school district.

I heard this week’s Planning Commission work session that the request for annexation had been pulled from the City Council agenda, but I haven’t spoken with anyone to confirm that, and the Feb. 4 documents aren’t yet up on the City website. However, regardless of the outcome of this particular request, the issues raised are significant ones for Northfield, and they should be considered and discussed. Read the post by the Center for Sustainable Living and tell me what you think.