Where’s the best place for the skate plaza? 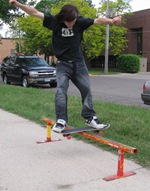 The meeting was blogged here by NDDC’s Ross Currier, blogged here by Union of Youth ED Josh Hinnenkamp, and Suzy Rook wrote about it in this week’s Northfield News: Getting on board: Support grows for a skating plaza in Ames Park.

At last Saturday’s Ward 4 meeting (blogged here), there was some discussion about where to locate the skate plaza: Babcock Park along Hwy 3, Memorial Park adjacent to the swimming pool, or Ames Park downtown. The decision will soon be made by the PRAB.

Sentiment appears to be shifting to Ames Park vs. Memorial. According to the paper,

The coalition lobbied for a spot at Memorial Park, in the open area adjacent to the pool. Vanasek [PRAB chair Rick Vanasek] said Memorial isn’t his first choice. Neighbors, during pool-planning meetings, were promised the rest of the 20-acre site would include trails and open space. Park lighting, they agreed, would be only for security. Ames Park, Vanasek said, is not only accessible, it can be lit for nighttime skating. “It’s an entrance to town. It can be a showcase,” he said.

What are the pros and cons of the three locations?