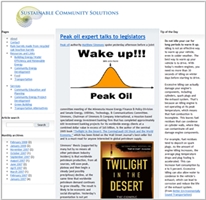 Bruce Anderson has been a blogger for a while, starting back in 2005 with RENew Northfield and for the past year on his Sustainable Community Solutions blog/web site. We’re now aggregating his RSS feed into our lower right sidebar.

Bruce is also a member of the Nonmotorized Transportation Task Force and the Energy Task Force for the City of Northfield.