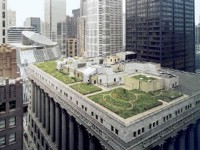 Once again, I’ve fallen behind in my reading. The February 11th Wall Street Journal had an interesting article about diverse cities around the world, from Ann Arbor Michigan to Beijing, China, pursuing similar ends. They are trying to reduce their energy use.

In Chicago, the goal is to reduce energy usage in its 15 million square feet of municipal buildings. One solution is to install rooftop gardens. On top of the landmark City Hall building, they planted a 20,000 square foot roof garden. Before the garden, the temperature on the roof could reach 160 degrees on hot days. The garden can keep the roof as much as 70 degrees cooler, greatly reducing energy costs.

In Ann Arbor, officials realized that they were spending one-third of their total electrical bill on streetlights. They replaced the incandescent bulbs with light-emitting diodes. The new bulbs last 10 years, or five times as long, and use half as much energy.

In Thane (a suburb of Mumbai, India) the focus is on solar water heaters. Not only does the city offer property-tax rebates to get residents to install solar-water heaters in their homes, it is retro-fitting municipal buildings with the same technology. The main hospital now meets all its hot water needs with solar energy and has cut its energy bill by about $23,500 a year – a quick pay-back on the $40,500 initial investment.

I remember hearing something not long ago about the City of Northfield’s efforts in cutting energy costs. Perhaps some one could contribute their two cents worth with the details.