In his Friday Memo for the week of March 17 – 21, City Administrator Al Roder announced the four finalists for Northfield’s Chief of Police position. Here’s Roder’s summary on each: 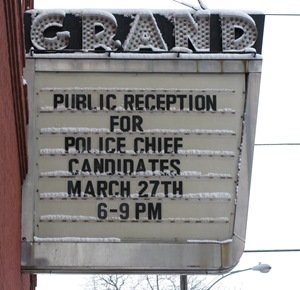 According to an article in today’s Nfld News:

The finalists will tour the city by bus Thursday from 2 to 4 p.m. and be the guests of honor at a public reception that evening at The Grand from 6 to 9 p.m. Interviews are set for the following day. Each will be interviewed by groups composed of members of the community, law enforcement officials, several city department heads and at least five local youth.

Also see the March 1 Nfld News: 29 apply for police chief position; Four panels will interview up to 8 semi-finalists and our blog discussion on the hiring process.

So what’s known about these four guys? And why didn’t Captain Roger Schroeder and Sergeant Mark Murphy make the cut?