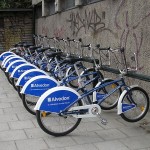 I know that there are die-hards like Bill Ostrem and Bruce Anderson, not to mention my husband, who bike almost all through the winter. But for the rest of us mere mortals, it generally isn’t until the roads dry up that we start thinking seriously about it.

Now spring is here, and I’m starting to get the itch. Carleton’s “Shrinking Footprints” blog had a piece today about the surprising and enormous success of the bike-sharing program in Paris.

In a recent stop-over in Paris on my way back home from studying abroad, I decided to spend an afternoon wandering the neighborhood around Notre Dame Cathedral. I was immediately struck by the rows of sleekly designed, basket-equipped bicycles, neatly lining the streets every few blocks. Each bike was marked with a funky Vélib logo (a mix of vélo, bike in French, and liberté, freedom), The bikes are hooked into specially designed bike-stands that keep them locked until someone needs a bike and swipes their access card at one of the computerized pay stations (which look like glorified ATM machines). The rider can then drop off and lock up the bike at whichever station is closest to their final destination (rarely more than 1,000 ft away than any spot in the city). The company (JCDecaux) tracks the bikes electronically by keeping tabs on the location from which each bike was last released and returned.

London has plans to implement a similar program. (I read somewhere that 63 cities in Europe have bike-sharing or other easy bike-rental options.) Now finally, some cities in the U.S. are starting to get with it. Washington, DC will roll out the first U.S. test of the idea next month with the SmartBike program in a public-private partnership with Clear Channel Communications. San Francisco has also inked a deal with Clear Channel for something similar. Other cities investigating the idea include New York, Chicago, Philadelphia, and Portland, OR. Even Tucson, AZ is looking into a limited version of the idea.

We’ve had several posts about bikes and biking on Locally Grown over the past year and a half. I think my first one was about biking in Copenhagen, Denmark, where 36% of the people commute by bike. Then Ross wrote about the Danes and other European trail-blazers paving the way to encourage more bike-friendliness and see bicycles as viable transportation, not just recreation. Shortly after that I wrote about a website featuring many photos illustrating what “complete streets” look like.

Most recently, Ross blogged about the program at Ripon College which gives new bikes to students. Maybe Northfield could do one better, and work with the colleges to implement a formal bike-sharing service here. Last May the City Council authorized the creation of the Northfield’s Non-Motorized Task Force for a year. Perhaps the task force could be continued to work on a project like this (among others). Who else might be interested in exploring the idea? Think it could work?