Skip to content
Home > Life > Reflection > What’s the matter with Kansas Northfield? Too many of us are snobs.

What’s the matter with Kansas Northfield? Too many of us are snobs. 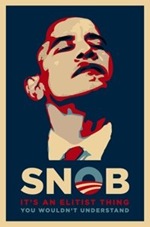 Ever since Snobamagate, I’ve been thinking about the degree to which I’m a snob… and whether Northfield has more than its share of snobbish people.

Twenty-five years ago, I worked for the Faribault Public Schools as a school social worker and it struck me how frequently the snobbishness of Northfielders came up in conversations among faculty and staff who I worked with. It really grated on them. Since then, alarm bells always go off in my head whenever I hear a fellow Northfielder make a snide remark about Faribault, Dundas, or other towns nearby.

The snide remarks are nearly always made by someone with at least a college education and the target of their remarks is the one of main demographics that Clinton and Obama are fighting over for this week’s primary in Pennsylvania —  the white, working class with a high school education.

In one of the comments I added to my January blog post, Why do you love Northfield? Why should people move here?, I wrote:

I often tell people that one of the neat things about Northfield is its social diversity. Most small towns with a college or university are dominated by its presence. They become a 99% latte town as described by David Brooks in Bobos in Paradise. Northfield is 50% a latte town. Half the population aren’t bobos, and I like that. Lots of conservatives and libertarians. Lots of blue collar, working class people. Lots of religious folks. Lots of people who volunteer in ways that bobos don’t.

I think many of us Northfielders who could be seen as bobos, especially the progressive liberal elites (which, as an Obama supporter with a Master’s degree, I’m arguably one, my support for Ray Cox, Tom Neuville and appreciation of the commentaries by David Brooks not withstanding), don’t recognize our own arrogance when we deal with others in the public sphere who are ‘not like us,’ especially ‘not smart like us.’

I think Obama is less of a snob than I am, but there’s probably a tendency in all of us to get a little condescending when talking about others who you don’t hang out with much. Once you’re a Senator, your circle of social contacts gets pretty limited, no matter what your roots.

I drink coffee most often at GBM and the HideAway, not the Quarterback or Perkins. I drink beer most often at The Cow and Froggy’s, rarely at the L&M or Corner Bar. When I go bowling at Jesse James Lanes with my kids, I don’t usually know anyone else there. I loved the Adult Spelling Bee. I don’t watch NASCAR events. I go to art gallery openings. I drink a lot of white wine in the winter.

But most of the guys I play racquetball and ride motorcycles with hang out in a totally different circle. They’ve never even heard of Locally Grown. I’d hate to think I’d be condescending in a conversation about them but I can see how it could happen if someone asked me why none of these guys frequent LoGroNo. I could easily make the same mistake as Obama did and slip into a little psychoanalysis that could be seen as patronizing.

I really like the PBS special, People Like Us: Social Class in America, because it touches on all these class issues and opens your eyes. I think it should be shown yearly in a ‘Social Class in Northfield’ event at The Grand, even though ‘my types’ would be the only ones to show up for it.

Comments are closed, but trackbacks and pingbacks are open.