Skip to content
Home > Businesses > What to do about a Blighted Downtown : Build a New One?
Published April 25, 2008 by Ross Currier

What to do about a Blighted Downtown : Build a New One? 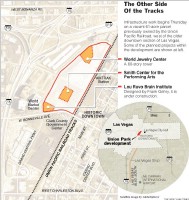 According to an article in Wednesday’s New York Times, Las Vegas is doing something that experts are calling unprecedented. In an effort to stimulate economic vitality in the historic downtown, local leaders have lined up $6 billion in mostly private funds for five major projects in order to jump-start the development of a 61-acre brownfield site.

The featured projects are an Alzheimer’s research center, an international center for jewelry trading, a hotel by “celebrity chef” Charlie Palmer, a new casino-resort, and a $360 million performing arts center. The collateral development is anticipated to include thousands of square feet of office space and residential units, so get your free bets ready for cheltenham and start practicing your gambling strategies.

The new development is literally on the other side of the tracks. The Union Pacific Railroad separates the new urban core from the historic downtown.

The presence of the rail line may also be an opportunity for a future link. Pedestrian bridges over the railroad tracks are envisioned to connect the new development of the westside with the Amtrak Station on the eastside.

There are some people that aren’t yet convinced. They are concerned that the new development will lure businesses from east to west. Proponents point to courthouses, government offices and older casinos in the historic downtown as cornerstones of continued economic vitality. On the other hand, SEGA, one of the world’s leading developers of video games, has announced the launch of its new SEGA game!

The city went through five years of planning and design, and several failed deals with developers, before entering into an agreement with the current developer. They’re confident that present plans will address all concerns. They only challenge they believe may threaten their vision is the economic slowdown. Las Vegas has one of the highest foreclosure rates in the country.

The desired positive impact seems to depend on proximity and connectivity. Perhaps Las Vegas’ bold gamble will illustrate how much of each is necessary for success.