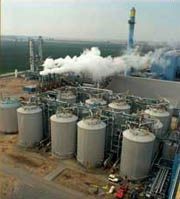 Two months ago, I never really thought about ethanol. Now, thanks to Progressive Rail’s efforts to get an ethanol plant built in Bridgewater Township, I’m reading everything on the subject that comes my way.

In the weekend edition of the Wall Street Journal, there was an editorial piece called “Very, Very Big Corn”. It started with President Bush’s recent call to reduce gasoline consumption and proposal to invest $2 billion dollars to promote the development of cellulose ethanol.

According to the article, “cellulosic ethanol-which is derived from plants like switch grass-will require a big technological breakthrough to have any impact on the fuel supply. That leaves corn- and sugar-based ethanol, which have been around long enough to understand their significant limitations.”

The piece goes on to say that the recent “stampede” toward ethanol is based on the federal and state subsidies that ran to about $6 billion dollars last year, “equivalent to roughly half its wholesale market price. Ethanol gets a 51-cent a gallon domestic subsidy, and there’s another 54-cent a gallon tariff applied at the border against imported ethanol. Without those subsidies, hardly anyone would make the stuff, much less buy it-despite the recent high oil prices.”

The subsidy has caused the percentage of the U. S. corn crop devoted to ethanol to rise from 3% to 20% in just five years, for a total of about 8.6 million acres of American farmland. According to the article, “reaching the President’s target of 35 billion gallons of renewable and alternative fuels by 2017 would, at present corn yields, require the entire U. S. corn crop”.

The price of corn rose nearly 80% in 2006 alone. This dramatic increase is driving up the price of burgers and making America’s meat-packing industries less competitive in the world market.

The Journal, hardly a popular subscription among tree-huggers, then raises the environmental issues. “As an oxygenate, ethanol increases the level of nitrous oxides in the atmosphere and thus causes smog”. In terms of global warming, the use of ethanol in gasoline “reduces greenhouse gas emissions by no more than 5%”. Well, I will say that, in my opinion, 5% is better than nothing, but we should be striving for more substantial objectives.

Moving on to the cost benefit analysis, of greatest interest to my personal evaluation process, the piece notes that scientific opinion is “divided about whether the energy inputs required to produce ethanol actually exceed its energy output. It takes fertilizer to grow the corn, and fuel to ship and process it, and so forth. Even the most optimistic estimate says ethanol’s net energy output is a marginal improvement of only 1.3 to one.” Not much better than the 1.25 to 1 ratio cited in the University of Minnesota – St. Olaf College report cited by Tracy Davis in a previous Locally Grown blog.

The article concludes that “betting billions of tax dollars and millions of acres of farmland on this hope strikes us as bad policy. If cellulose is going to be an energy miracle-an agricultural cold fusion-far better to let the market figure it out.”

If the Wall Street Journal is correct, and that ethanol doesn’t make economic sense, environmental sense or energy sense, wouldn’t the ethanol plant in Bridgewater Township be created so that a few investors could harvest some sun-setting subsidies?