We need a different kind of movie theater

Today’s Northfield News has a story titled Southgate Cinema, videos in new hands detailing the new owner behind the changes, Jerry Anderson. He intends to tear down the theater and develop the land, once a new 8-screen multiplex theater by Lakes and Rivers Cinemas is built further south on Hwy 3 on the Gleason property. I saw Jim Gleason in the GBM this morning and he said they’ll break ground this spring. (See Anne Brett’s post on N.org from last June for more background and discussion.

At poorly run multiplexes, projector bulbs go dim, the prints develop scratches or turn yellow, the soles of your shoes stick to the floor, people jabber on cell phones, and rumbles and blasts bleed through the walls.

If we want to see something badly enough, we go, of course, and once everyone settles down we can still enjoy ourselves. But we go amid murmurs of discontent, and the discontent will only get louder as the theatre complexes age. Many of them were randomly and cheaply built in response to what George Lucas conclusively demonstrated with “Star Wars,” in 1977: that a pop movie heavily advertised on national television could open simultaneously in theatres across the country and attract enormous opening-weekend audiences. As these theatres age, the gold leaf doesn’t slowly peel off fluted columns. They rot, like disused industrial spaces. They have become the detritus of what seems, on a bad day, like a dying culture.

And then he describes what’s on the horizon. It’s not what Lakes and Rivers Cinemas is likely to build on Hwy 3. (Photo insertions of the ArcLight theater are mine. Click to enlarge.)

The lobby contains a restaurant, a bar, and a book-and-gift shop. Before the movie, people hang out and have a drink or leaf through a hot new novel or a movie-star biography. The rest rooms are spotless, and the concession stand serves delicious coffee. All the seats are reserved, and they are plush, with plenty of legroom. The steeply raked auditorium is dark, and insulated from the sound of the other theatres in the same multiplex. Is this some sort of upper-bourgeois dream of the great good place? A padded cell for wealthy movie nuts? No, it’s an actual multiplex, the ArcLight, on Sunset Boulevard near Vine.

The idea of user-friendly theatres may be catching on. Sumner Redstone’s daughter Shari, the president of National Amusements, the family-owned theatre business, has vowed to convert half the lobbies of the chain’s hundred and nineteen theatres to social spaces with comfortable lounges, and to build more. Martinis will be served; newspapers and magazines will be offered. If theatres go in this Starbucks-plus-cocktails direction, the older audience might come back, with a positive effect on filmmaking, and the value of the movies as an art form and an experience could be preserved. After you are seated at the ArcLight, an usher standing at the front of the auditorium tells you who wrote and directed the movie and how long it is. He promises that he and another usher will stay for a while to make sure that the projection and the sound are up to snuff. There are no advertisements following his speech, and only four coming attractions. The movie begins, and you are utterly lost in it.

Perhaps it’s the “traditional” model of movie theater, where the film is a craft not a commodity and part of the experience is the socializing before and after the show. Let’s hope that there’s a “user-friendly” theater in Northfield’s future. It sounds like a downtown movie house to me.

It sure sounds like it could be the Grand Event Center which was showing movies up until 1985. 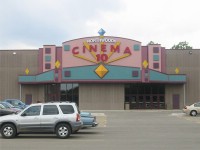 If the economics don’t work for that small of a venue, maybe someone could convince Steve Payne of Lakes & Rivers Cinemas to build a different kind of theater on Hwy 3 than the ugly, soon-to-be-outdated one his company is planning.

Lakes & Rivers has eight other theaters in cities around Minnesota, Wisconsin and South Dakota. In May 2005, the company opened a theater in Red Wing. A theater in Owatonna opened in December 2004. The Paynes are not strangers to Northfield. Steven Payne, vice president of the cinema company, is a 1998 St. Olaf College graduate.

Any influential Oles out there who might be willing to talk to their fellow alum about a more enlightened approach? Or should we just sit back and let the market do what it wants to do?