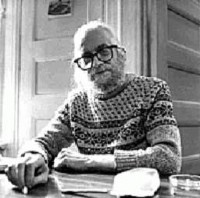 …to celebrate the birthday of Harry Smith.

Harry was known as a filmmaker, a visual artist and, at least to some, “the greatest living magician”. I first learned about him as a record-collector and producer of The Anthology of American Folk Music. The Anthology was a compilation of American music released on 78s between 1927 and 1932 that Harry had collected from old barns, dusty attics and flea markets.

Smith’s compilation had a powerful influence on American music in the late ’50s and early ’60s, first helping to fuel a resurgence of folk music and then helping to shape pop music. Bob Dylan is said to have “borrowed” a friend’s copy of the Anthology when he was living in Dinkytown.

So listen to Clarence Ashley do “The Coo Coo Bird”, Furry Lewis do “Kassie Jones”, Bascom Lunsford do “I Wish I Was a Mole”, Blind Lemon Jefferson do “Rabbit Foot Blues”, Breaux Freres do “Home Sweet Home”, or Uncle Dave Macon do “Roll Down the Line”…

…and appreciate the results of Harry Smith’s somewhat peculiar but perhaps brilliant efforts.