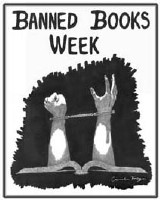 “Restriction of free thought and free speech is the most dangerous of all subversions. It is the one un-American act that could most easily defeat us.” – Supreme Court Justice William O. Douglas

Justice Douglas was right, restriction of free thought and speech is the greatest of all threats to the United States of America. These freedoms were a big reason that the people rose up against the British Monarchy near the end of the eighteenth century.

It is important to remember that those rights were won with great sacrifice and that we can never take those rights for granted. Whenever they are threatened, we must be ready to defend them.
It is this need to defend those rights that led to the creation of Banned Books Week. This celebration of our Freedom to Read is observed during the last week of September each year. This year, 2006, marks the 25th anniversary of the event.

So, Thursday night, come on down(town) and join the fun for the Spelling Bee…and, while you’re there, raise a toast to our Freedom to Read.