Who Says I Can’t Do Fluff? 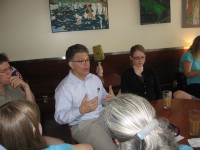 Griff just called me on the phone. He was racing down the highway in response to a Fluff Alert. I told him to slow down and I’d step up to the plate.

Here’s my swing at some fluff. US Senate candidate Al Franken (and SNL alum) was hanging at Goodbye Blue Monday this (Thursday) afternoon.

Yo Griff, if Tina Fey shows up in Downtown Northfield to campaign for Al, please give me another call.

Ross, I caught Franken in conversations about the schools, Hager for mayor, and health care before he and his entourage walked over to The Sketchy Artist where, when I left, he was doing a sketchy candidate bit. (I couldn’t get close, but I think he was drawing blue states.) His aide said they were going next to OoLaLa and Rare Pair: Franken wanted to visit local businesses run by women! All that in beautiful downtown Northfield.

Update 9:30 PM by Griff: Robbie and I stopped by The Sketchy Artist to buy a sympathy card tonight and store owner April Ripka was nowhere to be found. However…

April’s mom, Linda Ripka and sister, Sarah Ripka were tending the store, and were quite happy to display the drawing of the United States sketched earlier in the day by Al Franken.