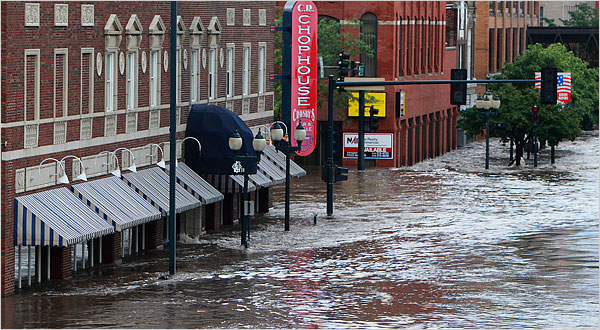 Recent rainfall over the midwest and northern plains states has resulted in extensive flooding in southeastern Minnesota, southwestern Wisconsin, and in Iowa. LoGro reader and frequent commentor Paul Fried suggested via email that we start a discussion thread for this topic. He wrote,

I know that Kitchen Concepts … carries Bertch cabinets (kitchen & bath), made in Waterloo, IA. I don’t think the Bertch factories were affected by the flooding, but I’m sure that some of their employees’ homes were. I’m sure there are other B2B connections between Nfld and areas affected by the flooding, which, in Cedar Rapids, they are saying was worse than New Orleans.

I’d be interested to hear how others in the Northfield are have been affected by these natural disasters. What impact has it had on your family or business? What issues are being faced by people in the flooded areas? Are there suggestions for anything that may be done to help?