Skip to content
Home > Life > Reflection > Have Northfield parents gone over the edge on their daughters’ sleazewear?

Have Northfield parents gone over the edge on their daughters’ sleazewear?

Blogger Susan Lenfestey has a commentary in Sunday’s Strib titled, It’s summer, and folks are busting out all over (Barbie doll image is my selection): 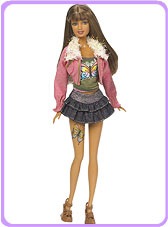 Nor did we who believe in gender equality intend this to be a license to the fashion industry to market slutwear to prepubescent girls, and bondagewear to their big sisters…

It’s not just young people. Women at the office are showing more, well — lower cleavage than the plumber under the sink. Seems to me we’re a culture obsessed with sex but clueless about eroticism…

It’s the sleazewear being marketed to girls and young women, and the women who buy into it, that makes me sorry for how far we’ve come — and how backwards we’ve gone.

I like viewing summer sleazewear on the women of Northfield as much as the next guy but I’d have to agree with Lenfestey… it’s a bit distressing to see how many young girls are dressing like the Barbies they’ve played with.