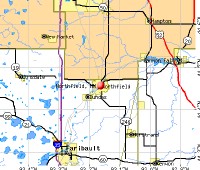 Okeh, I will begin by “revealing” that I am the brother-in-law of Ray Cox. However, Ray isn’t running for elected office now, so find something else to get you excited.

Ray had a letter to the editor published in the June 24, 2008. It was unfortunately titled,”Widening not best Hwy. 19 plan”. A more accurate, if not better, title would have been “Widening not only Hwy. 19 plan”.

In it, Ray stated, “I believe it is more important for our city leaders to deal with traffic flow issues within the City of Northfield and in the adjacent planning boundaries than to call on MnDOT to rebuild Highway 19 as it exists.” This is crucial, and often repeated, advice that, I believe, must be heeded if we are to make progress on the east-west connection(s) between Interstate 35 and Northfield.

I think that Ray’s comments came in response to the front page article, “Lawmakers plead for state to widen Hwy. 19“, in the June 21-22, 2008 Northfield News. The article was illustrated with a picture of out-going City Administrator Al Roder with his quote, “It’s not good enough to be on their list. We need this to move forward.”

My first involvement with Highway 19 came about four years ago. The NDDC, at the request of then Chamber of Commerce President Robert Bierman, had agreed to support local efforts on achieving long-discussed improvements to the road. When I admitted that I had no background on the subject, Robert suggested that I get my hands on a copy of the Northfield Industrial Corporation’s July 2000 study, “A Recommendation for Improvements in Safety, Access and Quality of Life Issues for Northfield Transportation”. After striking out with a couple of prominent organizations in town, I finally got a copy…from Ray.

It is, in my opinion, an extremely valuable collection of information. I have brought it up, and distributed summaries, at two or three Comp Plan work sessions and at least one of the Transportation Advisory Committee meetings. Of particular interest to me is the fold-out map that is appended to the report. It illustrates the top twelve priority transportation projects for Northfield. But more on those later.

After educating myself thanks to Ray’s copy of the NIC Transportation study, I ended up having meetings with a number of people, including then State Representative Ray Cox, then Council Member Dixon Bond, and a small conference room full of MNDoT folks. All of them said, repeatedly, that any progress on Highway 19 would have to be part of a plan that encompassed all of Northfield’s transportation network, including connections to and from Highway 19 as well as northern and southern alternatives to Highway 19.

The twelve priority transportation projects in the NIC study are all about those connections and alternatives. When we discussed them as part of a Comp Plan work session, at best you could suggest that we’ve addressed one and half of the twelve. At that rate, it will take far more than ten years to complete all twelve projects.

At the close of the article, Roder states, according to the Northfield News, that “being the squeaky wheel is a good start..but that if the city could help with funding, he believes MnDOT would give the project an even more favored status”. Based on what I’ve heard from elected officials and MNDoT staff, I think that instead of squeaks and funds for Highway 19, we might be more successful if we came forward with schedules and budgets for elements of the broader transportation network.