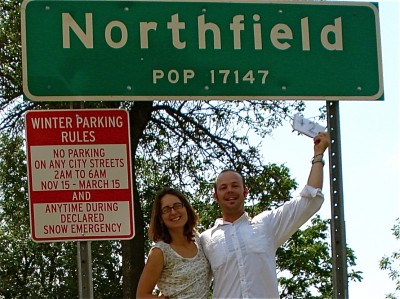 Josh and I puttered into Northfield, Minn. in my Subaru Legacy from the east on Route 19 on a clement Thursday afternoon. I had traveled to the city from the Berkshire Mountains of Western Mass., with side trips to a sailboat in the Caribbean Sea, Chesuncook Lake in northern Maine and my new employer’s summer retreat in New Hampshire’s White Mountains.

Northfield’s emerald sign sprang into view like a leggy stalk of corn. We drove several feet beyond it before we halted short, came about and wedged our futon-laden station wagon beside the curb. We scampered in front of the sign for a photograph, and Josh held my reporter’s notebook high alongside the part that said, “POP 17,147.” On the notepad I had written, “+ 2.” We smiled, and my knees trembled in a way they had not done even when a squall had chased our boat past the Turks and Caicos islands at 3 a.m., or when my boss Leonard Witt had sent me down a backwoods trail on a mountain bike. This was Minnesota, it was unfamiliar ground and it was home.

We scoured the city for an apartment, or at least a place to dry out the ill-fated futon, which had weathered two Midwest downpours. We first met local technical whiz Nathan White who, among other tasks, helps direct Northfield.org, an “electronic commons” designed to strengthen the “fabric of the community,” according to the site’s mission statement. Nathan showcased the sunny two-bedroom apartment in the top half of his duplex a few blocks away from downtown. Still, the siren of Division Street seduced us closer to the city’s hub.

We dialed the first phone number we found pasted to an apartment door. Norman Butler answered and, in minutes, he swung his Volkswagen into the lot behind the Contented Cow pub and wine bar where we were staving off dehydration, low blood sugar and general exhaustion with slugs of Wisconsin’s Sprecher Brewing Company‘s root beer. The icy tonic refreshed us but Norman clearly drew his energy from a more potent source. The U.K. native, who appeared to be in his 50’s, leaped up staircases and sped across sidewalks as he showed us several of his apartments across town. He even pointed out a few of his competitor’s flats. We were only stopped short once when we attempted to pop into an apartment complex a few blocks southwest of Division Street.

“This is a secure building!” a tenant said, holding fast to the entrance door handle, unmoved by Norman’s charm.

In addition to Norman, a few other local professionals joined our housing expedition including Katharine Kuyper of the Re/Max Results office, a dairy farmer named Janet who manages an apartment complex off Union Street, and Aaron of the Goodbye Blue Monday Coffee House, who doled out solid advice and use of the phone book. My new employers and the administrators at LocallyGrownNorthfield.org offered similar support. Tracy Davis, for one, sent us to Froggy Bottoms River Pub and Suites to ask the owner for a room. The proprietor was out of town but, it was after that final inquiry that Josh and I began to appreciate what it could mean to live so conveniently close to a bar. One of Norman’s apartments sat directly above his restaurant, “The Cow.” So, we found Norman immediately and took the place.

That night, Josh and I reclined on the pub’s patio and savored liquid indulgence and three cartons of hot buttered popcorn. Upstairs, a 20-inch fan purchased at Econofoods diligently aired our soggy bed. I also bought a flowering plant there, a hot-pink kalanchoe, which a young supermarket employee brought to my car after I forgot it at the checkout. I named the plant Helga and put her on the windowsill so she can people watch. I think she likes her new home. 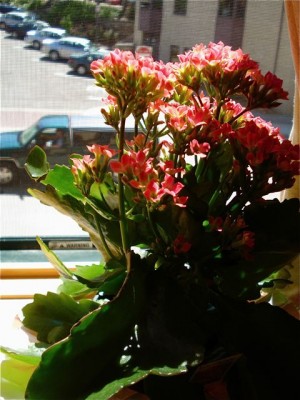