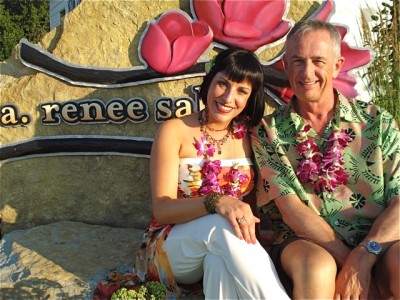 The owners of the new “a.renee salon” on Clinton Lane off Route 3 hosted hundreds of beauty-seekers and those in search for hair stylists on Thursday evening during its grand opening luau, with a few attendees even arriving in an ebony limousine.

The salon’s two European Touch Murano pedicure spa chairs, for example, are likely the only ones of their kind for miles around, Swanson said. The chairs cost about $12,000 each according to Internet sales Web sites.

“We had some trouble getting them to meet building code,” Swanson said of the chairs, smiling on the salon’s rear patio.

Apparently, the luxurious footbaths at the bases of the chairs had fallen into the category of “wading pools,” which could present a drowning hazard for small children, Swanson said.

More than one lei-wearing party guest seemed to look forward to drowning daily worries while reclining in the chairs. Lina Schultz of Farmington, for example, said she planned to schedule a pedicure at the salon soon.

“This salon seems more elaborate and makes me feel like I would be more pampered than others I’ve been to,” Schultz said beside the “nail bar,” which is a manicure station next to the pedicure chairs designed to look like a martini bar. 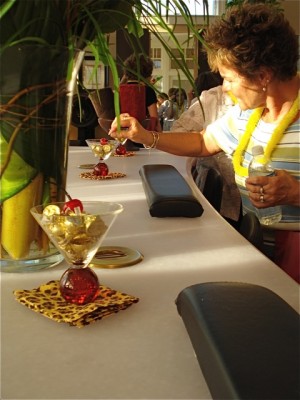 Photo: Bonnie Obremski/RepJNorthfield; Caption: Lina Schultz examines a glass maraschino cherry in a decorative martini glass at the salon’s nail bar.
Swanson said he believes Northfield’s market is prime for supporting the new business. And, the salon is simultaneously lending a hand to other local entrepreneurs. Artist Barb Matz for one is displaying work there. One of her sculptures of a woman stands in a window facing the entrance sign with her hand raised in seeming triumph.

“It shows how my dream has come true,” Mulligan said of the figure.

During our conversation, Mr. Swanson wondered aloud why higher-end restaurants in the Northfield area seem to come and go on a regular basis. Is there truly a demand in Northfield for cutting-edge cuisine? Or, for that matter, for a salon that offers (among many other things) a permanent lip make-up service priced at $525? 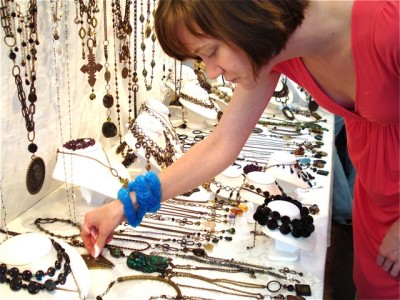