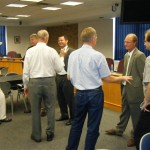 I attended the “meet & greet” event yesterday afternoon which was held for the three finalists for the Economic Development Manager position. The three candidates, shown with faces toward the camera in the photo at left, are (from left to right) Jerry Carrier, Jody Gunderson, and Scott Beckman.

I saw several upper-level city staff at the event while I was there, including Al Roder, Joel Walinski, Brian O’Connell, and Kathleen McBride among others. City councillors Pokorney, Denison, and Vohs and Mayor Lansing were also there, as well as EDA members and a few other interested citizens.

I stayed for about an hour, spoke briefly with each of the candidates, and gave written input as requested regarding my impressions of each of them. (Staff had prepared a “feedback form” which was offered to anyone who attended.) Though my conversations with each were brief, I came away with a clear favorite, so I’m especially interested in seeing who is offered the position.

Anyone who attended who wants to talk to me about their own impressions or mine, just let me know! But I won’t do it online.