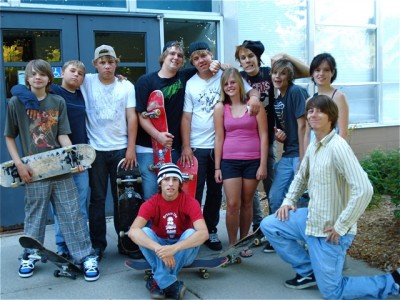 In order to camouflage with the counter-culture teenagers I expected to descend upon in Bridge Square at midnight on a Friday, I pulled on a pair of jeans and a T-shirt printed with electric guitars. I arrived at the city center with a notebook in one hand and a camera in the other and found the place abandoned.

A Northfield police cruiser slowed as it passed me on Division Street. I sneaked home with wilted hopes that I could root out a story about a subculture of malcontent youth bent on defiling public and private property. I at least expected to flesh out a story of young skateboarders testing the limits of the city’s laws and patience.

On Monday, I eventually did find the skateboarders — they were at the city council meeting. The Northfield Skateboard Coalition, they said, had won this month’s Waste Management Green Team award and would be monitoring a few of the city’s recycling bins. In addition, the coalition had partnered with America in Bloom to water the city’s plants three times a week.

Too cute to be true? Well, the teens did have an ulterior motive: Raising money to build a public skateboard park within Ames Park off Route 3. For every ton of paper the coalition helps recycle, Waste Management promised to pay the coalition $15, the skaters said. By watering the plants, America in Bloom agreed to bestow a donation at the end of the summer, the teens explained.

The coalition has helped raised $30,000 so far across the past two years and will need at least another $150,000 or so, give or take, according to Joshua Hinnenkamp, executive director of the Northfield Union of Youth based at the Key. However, one of the largest of the project’s remaining hurdles is final approval by city officials, according to Ruth Amerman the union’s youth board president.

I wondered how anyone could deny anything from the baggy pants and mohawk-sporting teens who were so willing to nurture public geraniums and flatten boxes for a buck. But, I’m still new here.

So, I began my first two weeks as a Representative Journalist in Northfield chasing a news tip that lead me in a different direction than the one I had anticipated. According to the tip, a Division Street merchant who had been plagued by a posse of pre-teen boys had questioned whether Northfield was providing its youth with adequate resources.

I am still not completely convinced that community leaders are meeting every need of Northfield’s young population. After all, the city is still reeling from allegations of disproportionately high heroin use among that population. However, the majority of adults and young people I spoke with during my first interviews seemed content with life in the city, and those that were dissatisfied were dedicated to making positive changes.

Late last week, I summarized those findings for Christopher Richardson, superintendent of schools, during an introductory meeting I scheduled in his office. Richardson carries decades of experience as a super, much of it in urban areas closer to the Cities. Richardson said there is an overall niceness among Northfield kids you don’t find everywhere but, he said their quirks still span the typical spectrum of teenagedom.

The Union of Youth, he said, represented only a small slice of the high school’s student body. Of those lingering on the fringes of high school society, Hinnenkamp said even if community members offered a program for every kind of teenager, not all would want to take what was handed to him or her. So, to conclude, can we really leave it at “different strokes for different folks?” Well, I say, I look forward to keeping apprised of the good work of the kids at the Key. Meanwhile, I hope to become a journalist for Northfield that can also find matters of import among the voices of citizens that aren’t so easily heard.