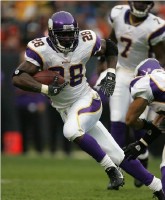 While watching the Royals beat the White Sox yesterday, I received an even bigger and more entertaining surprise. Northfield’s own Jim Johnson was on a Minnesota Vikings commercial.

Jim, owner of Northfield Amcon, 109 North Water Street, is a long-time Vikings fan. Johnson points out that his support began with the team’s very first season and reveals the year that he graduated from high school. I’m sure there’s something on display at the Historical Society from that same year.

At any rate, I heard this morning that Jim’s nickname at the Sertoma Club is now “Hollywood”. It is rumored that autographed pictures of Johnson in a Viking’s jersey are being auctioned off as a fund-raiser for this community service organization.

One question remains, is it true that Jim has been working with Adrian Peterson on following the Viking’s blocking assignments this past off-season?