Catching a Glimpse of Our Historic Economic Sense of Place 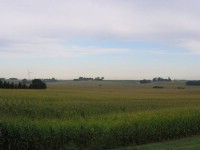 I first ran this race a year or two after I moved to town and my then-neighbor Kenny Morrell talked me into it. He was a professor of classics at St. Olaf College at the time, had seen me jogging around the block with diligence if not speed, and convinced me to head over there with him. As we trotted the first few blocks from the starting line together, I learned that he’d run cross country for Stanford. Then he picked up speed, smiled at me, and said “See you at the finish line”.

It was definitely the beginning of something. I’ve run five marathons since then, although none since 2001. Every year, I think it’ll be my last 15 K, but every year, I see so many of my long-time “running friends” at the starting line, I remember part of the reason that I keep doing it. It’s really being part of a community within a community.

There’s another reason that I like running it. The very first time I ran it, inspired by Kenny, I was amazed at what I encountered just about a half mile to the east of Northfield, along Wall Street Road. It’s farmland.

Here’s a view from near the corner of Kane Avenue and Woodley Street. It’s just beyond the halfway point, and the turn that takes you back toward town. See…farmland.

Not long ago Dick Crouter spoke up at a Downtown Forum. He talked about the DJJD 15 K in the context of culture. Dick described it as a run back into Northfield’s agrarian beginnings, part of it’s economic heritage.

Maybe it’s partially that “runner’s high” but every year, when I’m about 3 or 4 miles out, I get a bit of a thrill, leaving the Highways and Housing Developments, and the Gas and Gos and the Big Boxes behind, and being surrounded by just beans, corn and farms.