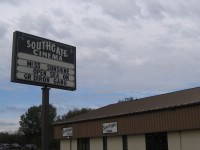 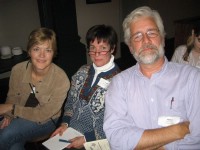 Southgate Cinema and St. Olaf College today announced a strategic partnership for next year’s Spelling Bee competition for the Friends of Northfield Public Library. Under the terms of the agreement, this year’s winning faculty team of Paul Zorn, Maggie Odell, and Roz Eaton-Neeb will take a leave of absence from their positions at the college in order to devote all their energies to the theater.

Attorney Lance Heisler, speaking on behalf of Southgate, said the theater recognizes their chronic problems with the spelling of the movies on their marquee at the intersection of Hwy 3 and Woodley. “It’s become an embarrassment to them and they decided that this was an opportunity for them to address the situation. The team will be paid a considerable sum of money for their appearance, as well as placing the letters on the marquee throughout the year, but the theater believes it will be money well spent.”

Amy Gage, director of communications for the college, expressed dismay over this unexpected development. “We’re usually supportive of staff and faculty who want to contribute to the community. But we feel this is a pusillanimous decision on their part. We tried to talk the team out of it but they were adamant and we had to choice but to approve it, given their celebrity status now on campus and throughout the Northfield area. This may make us rethink our support for such activities in the future. You can be assured that President David Anderson will raise this issue at next week’s NDDC downtown forum.”

At least one local church has taken sides in the debate. Emmaus Baptist is allowing the Ole team to use its church sign for practice. “I can’t spell my way out of paper bag,” said Pastor Will Healy. “These people have a skill that can take them far beyond, career-wise, whatever their pedestrian-level responsibilities might currently be at St. Olaf. If we can help them realize their full potential, we believe its consistent with our mission to do so.”