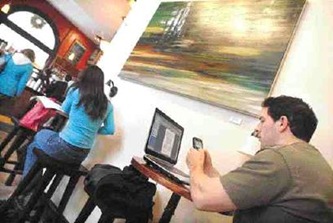 I’m one of the many people in Northfield who A) spends most of my day on a computer and B) spends a decent chunk of that time in public spaces with wi-fi access (coffeehouses and pubs).

I’m increasingly irritated by my fellow laptop jockeys who use their cell phones or their VOIP service within earshot of others, especially me. I’m tempted to order one of those illegal cell phone jammer devices.

I understand the temptation. Online collaboration increasingly requires one to be in voice contact while navigating web pages.  But puhleeeeease, it’s really rude. Either do this elsewhere, or use IM instead of voice.

Lately, I’ve taken to making eye contact with the offender, and then giving them the phone gesture followed by a pointing motion to the outdoors or hallway. Most get the hint.

Anyone else have interventions to suggest?

And for a related annoyance, see this funny September/October 2008 Technology Review article by Jonathan Franzen titled “I Just Called to Say I Love You” – Cell phones, sentimentality, and the decline of public space

Which is why, of all the worsening varieties of bad cell-phone behavior, the one that most deeply irritates me is the one that seems, because it is ostensibly victimless, to irritate nobody else. I’m talking about the habit, uncommon 10 years ago, now ubiquitous, of ending cell-phone conversations by braying the words “LOVE YOU!” Or, even more oppressive and grating: “I LOVE YOU!” It makes me want to go and live in China, where I don’t understand the language. It makes me want to scream.