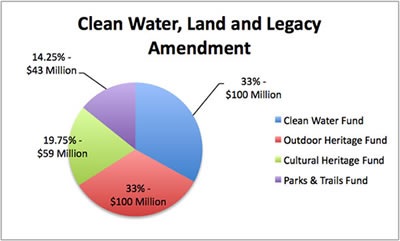 The Clean Water, Land and Legacy Amendment (DNR page) goes before Minnesota voters on Nov. 4th. The question on the ballot will read:

“Shall the Minnesota Constitution be amended to dedicate funding to protect our drinking water sources; to protect, enhance, and restore our wetlands, prairies, forests, and fish, game, and wildlife habitat; to preserve our arts and cultural heritage; to support our parks and trails; and to protect, enhance, and restore our lakes, rivers, streams, and groundwater by increasing the sales and use tax rate beginning July 1, 2009, by three-eighths of one percent on taxable sales until the year 2034?“

Discuss the issue here and/or in the message thread attached to Ross’ blog post. And then take the straw poll.