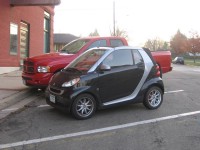 I noticed this Smart car parked outside the Grand Event Center a few weeks ago and didn’t have my camera ready. Today, I caught it on film…or in pixels.

I saw my first Smart Car a little over five years ago. My family and I were traveling in Italy and we saw one pull up in front of the sidewalk cafe where we were dining in Siena. At first I thought it was some kind of experimental vehicle.

Later, when we were in Rome, I saw at least a dozen of them. I was really impressed that they were about the same length as a motorcycle and so could park perpendicular to the curbs, basically taking up half the space of a typical car.

If you haven’t seen one up close yet, keep your eyes open for this one. Apparently, it’s in Northfield, at least now and then.

Do me a favor, if you see the driver, ask about the mileage.