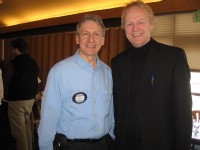 (Last September, I spent an hour at the James Gang Hideaway visiting with a colleague of his, JÃ¸rgen Jensen, a journalist with Danmarks Radio (DR), Denmark’s national broadcasting corporation. He also wanted to learn about all the citizen journalism/community media/civic blogosphere stuff we’ve been doing here in Northfield for the past decade.)

Northfield.org’s Anne Bretts was kind enough to pick him up in the Twin Cities and bring him to Northfield for the day… and return him. How’s that for Minnesota hospitality? I brought him to lunch at Northfield Rotary (“Hey, everybody, a real live Norwegian named Thor!”).

I’ve included Thor’s email to me and Anne below in case others are interested in what he’s up to. Now we just need a similar visit from a journalist in Sweden to complete a Scandinavia trifecta and maybe top it off with visits from journalists in the other Nordic countries of Finland, Iceland and the Faroe Islands.

I am visiting Minnesota in March and would very much like to meet you and learn about your experiences at northield.org. I have talked to JÃ¸rgen Jensen from Denmark who suggested me to contact you.

The Norwegian Broadcasting Company (NRK) has granted me a scholarship to study best-practice examples of Consultative/Participatory/Public Journalism.

In this connection, I will be visiting the USA between 5 and 15 March, this year, conducting research on the topic. Consequently, I am looking for TV/radio/newspapers/ websites/individuals in the US who may be able to provide me with concrete examples on their experiences on consultation among people (on the grassroots-level) on current questions. Your experiences at northfield.org seems to be very relevant and I would like to make a trip to Northfield while I am in the Twin Cities. It would be fine if it was possible to come visiting you either Wednesday 7, Thursday 8 or Friday 9th.

I am working as a News Editor in the Norwegian Broadcasting Corporation (NRK), the public – and largest – radio/TV-company in Norway. In my small corner of NRK, in an attempt to promote the principles of consultation in media, I have for several years promoted theorizing and practicing the ideas of “Public/participatory Journalism”.

Since my humble initiatives started internally in 2004, theorizing and practicing public journalism has become a national goal for the whole organization, to be implemented in 2007.

As part of a working group, I have been lucky to have had the opportunity to contribute to implementing the idea of public journalism – or what to call it – in all district divisions of NRK, as well as presenting the concept at various conferences around the country.

The practice of the ideals of particapatory/public journalism is, however, only beginning to take hold here in Norway. One of our attempts has been to hold a consultation among regular people at the grassroots level on topics of interest as part of a TV news-cast once a week. The participatory panel, which changes every week, has already radically changed the traditional gender-ratio in the news. In the panel, two out of three participants are women; not the other way around. Examples of topics thus far consulted on (with additional supplementing coverage on radio and the internet) include: obesity, environmental issues, vandalism, driving behavior, adoption and identity, youth and alcohol and the commercial focus of Christmas. For further information (in Norwegian), see for instance

The attention given to this program “Ã˜stnyttMagasinet” has already in several ways challenged the traditional journalistic mind. My colleagues and I have experienced that we, ourselves, have to learn the lessons of consultation to unite on the subjects being discussed, and to be open-minded and cooperative to find the best angle in looking at the issues.

Furthermore, we experience how “consultative journalism” challenges the ideals of Journalism; interviewing-technique, furnishing the topic with facts, as well as our attitude towards people in general.

With the scholarship I have been lucky to be granted, I hope to learn about other practical examples based on similar theories of applying consultation and public participation in media.