Best in Minnesota for 2008? Sarah Nienaber and Gospel Gossip 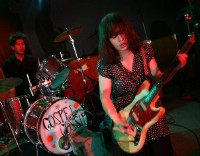 No doubt the scene is familiar to many Northfielders. That’s because Riemenschneider starts his list with the “Best Overall Trend”, female-led rock bands, and names the Nienaber-led Gospel Gossip as the “best newbie”.

Back in ’07, ’round this time of year, the group thrilled a packed house down at the Cow. Maybe we’ll be treated again before school starts up in ’09.

Another “best” cited by Riemenschneider is the “Best reason to pay taxes in St. Paul instead of Minneapolis”. He includes two City-sponsored music fests and the relocation of Eclipse Records (an all-ages music venue) funded “in large part by a city grant”.

Of course, I’ve already stated that I think Riemenschneider is a genius. He’s long been advocating for public investment in local music to stimulate economic development in the private sector.