The annexation agreement, among other things, indicates how much Northfield would reimburse Greenvale for the property taxes the township will lose when 530 acres of undeveloped farmland goes onto the city’s tax rolls. Northfield is annexing the land to attract industrial developers in the hopes of widening the tax base and creating jobs.

Currently, no developers are publicly showing interest in buying the land, which lies on the city’s northwestern border (see map below).

“In the end, it took a while since the supervisors usually only meet once a month,” Brian O’Connell, Northfield’s community development director, said after the final negotiation meeting at the Township Hall.

O’Connell, along with Joel Walinski, interim city administrator, represented the citizens of Northfield throughout negotiations with Greenvale.

“We don’t want to give up the land of course, but Northfield gave us a fair deal I thought,” said Richard Moore, chairman of the township supervisors.

The Northfield City Council is expected to vote at Monday night’s meeting at City Hall on whether to approve the annexation agreement (see agenda). If the council approves the agreement, the Minnesota Municipal Boundary Adjustments Board will examine the annexation process to ensure Northfield’s officials followed correct procedures. If the board approves, the annexation will be final.

The proposed payment plan would reimburse Greenvale in the amount of about $3,854 a year for five years. That figure is the amount of money Greenvale currently collects in taxes on the property. According to the agreement, the reimbursement amount would change year-to-year as Greenvale’s property tax rate changes. In the sixth year, Northfield would pay a “balloon payment” that would equal 20 more years of annual payments. In all, Northfield would pay Greenvale about $96,362, using today’s property tax rate figure for Greenvale.

The practice of priming land for development without having any interested developers is atypical for Northfield, Walinski has said. In 1980, for example, Northfield annexed land from the adjacent Waterford Township for the sole purpose of allowing the Sheldahl company to expand, according to an article in the Northfield News.

But there were unusual opportunities associated with the Greenvale plan. Namely, three township farmers, represented by real estate agency Land Vista LLC, approached city officials about two years ago to apply for annexation. The land they offered, with the addition of a small parcel Saint Olaf College agreed to have annexed, would form a contiguous stretch of land bordered to the south by a rural portion of State Highway 19.

In anticipation of the council’s favorable vote, a new subcommittee of the Economic Development Authority called the Business Park Development Committee has outlined some steps to building a master plan for the new land. The three-person subcommittee is prepared to present those steps to the council on Monday, along with other objectives for 2009.

One of the steps is to create an agreement between Northfield officials and the Greenvale farmland owners. The agreement would clarify what would happen if a developer becomes interested in buying property from the farmers for industrial development.

In 2008, Northfield officials discussed another possible annexation agreement with the adjacent Bridgewater Township that would potentially bring more than 400 acres into the city. Walinski and O’Connell said there currently are no formal plans to explore such an agreement further, however.

“We haven’t received any written requests for annexation from them,” Walinski said of the Bridgewater Township supervisors. “Until we get something in writing, it’s all speculative.”

Gregory Langer of Greenvale, a corn and soybean farmer, said he believed the annexation negotiation agreement with Northfield might have caused some long-term changes in the way some townspeople participate in government.
“I definitely think some things will happen in the next year where people in the township pay attention to these things earlier,” Langer said. “I think they’ll seek out information about what’s going on with the township government and about any developmental planning sessions that happen. I say that not so much because I’m seeing more people showing up at meetings, but because there’s been a rallying of people in the township who are disappointed and disturbed that so many things happened that they weren’t aware of.”

Langer first grew interested in following the annexation process when he learned that Northfield’s proposed business park development could one day cause his fields to be split by an access road. As he interacted more with the township’s government, however, he also became interested in finding a better way to disseminate information about government happenings to a greater percentage of the public.

Langer said he would have liked to see Northfield pay even more money in compensation to Greenvale in the annexation deal, even though the amount far exceeds the state’s minimum requirement of tax reimbursement for only two to eight years. Greenvale consultant Dean Johnson at one time told supervisors that most townships negotiated for a much higher compensation than the state minimum. Langer is also unhappy at the prospect of paving over land that currently supports crops and livestock.

“Prime farmland is a precious thing and once it’s paved over there won’t be any going back,” he said.

Moore said townspeople would likely vote on whether to institute a planning commission at the annual township meeting in March. But he said he wasn’t sure such a commission would be necessary, at least not this year.

“With the economy the way it is, I don’t think we’ll need it this year,” Moore said. “The township is growing a little bit, but I see Greenvale staying ‘ag’ yet for quite a while. I don’t see a lot of big changes coming here yet.” 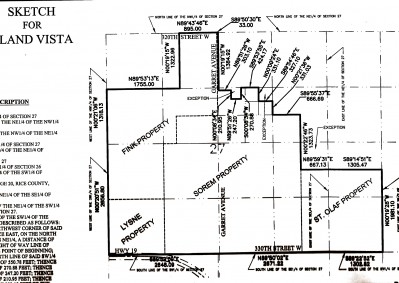 Copy of the annexation agreement:

Previous Representative Journalism Project reports on this topic, beginning with the most recent: