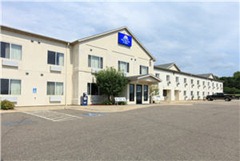 I got email from NCO Chair Nate White yesterday alerting me to this essay posted on the TC Daily Planet last week: FREE SPEECH ZONE | Language Shootout in Northfield

Jesse James stormed Northfield last weekend, six guns blazing, as he tends to do each September.  But this time, he and his gang didn’t speak a lick of Spanish.  And that was a mistake.

Last year, the Defeat of Jesse James Days organizing committee included a Spanish language re-enactment of the James Gang’s 1876 raid on Northfield as a way of reaching out to the town’s burgeoning Spanish-speaking population.  But while some applauded the effort and welcomed a more diverse audience, many were angered by the move…

This year, all eight re-enactments of the raid on Northfield were conducted in English.  When a curious local asked at the information booth why there was no Spanish language version this year, he was told that the organizers found it “too controversial.”

Financial challenges aren’t stopping Eddy from imagining a bigger, better DJJD. He’s already looking at the possible inclusion of a soap box derby and is considering staging a raid re-enactment in Spanish in May during local Cinco de Mayo celebrations.

Last year, the committee was criticized for hosting a raid re-enactment in Spanish without advance notice, a move which frustrated some DJJD visitors. While he’s anxious to share Northfield’s history with Spanish speakers, he says it’s impractical during a public celebration where out-of-towners might not expect the switch.

Links to the issue from last year:

Visitors who showed up to one Saturday re-enactment of the 1876 failed robbery attempt at First National Bank first heard emcee Dan Freeman narrate the events in English, followed by the Rev. Father Denny Dempsey translating into Spanish…

This community has long prided itself on its inclusivity. The decision to provide narration is an acknowledgment of the many Latinos in our community who may not have ever heard the story of the raid. They should be able to share in our pride.

That said, next year the committee members need to more widely promote, well in advance and in both English and Spanish, that they will provide the narration. That way, more Latinos will be alerted to attend and those who don’t want to listen to the translation can plan to attend at a different time.

While the 2011 Horseshoe Hunt clues have started appearing on the DJJD website, some members of the DJJD committee have begun to question the wisdom of this year’s location for Horseshoe.

While Freeland’s final destination for the Horeshoe remains a secret, its approximate location quickly became controversial, once other DJJD Committee members learned of the activity.

"I know that we’ve had some problems in the past with the Horseshoe found too quickly," said Hayes ‘Gabby’ Scriver,  a 3rd-year DJJD Board Director. "But this looks to me like it’s a little over the top. If the Horseshoe is anywhere near the dam, we can expect that Malt-O-Meal will object.  They own the Ames Mill dam and they certainly don’t want anyone messing around there, underwater or not. What if the dam was accidentally damaged?"

DJJD General Chair Dwayne Reddy disagreed. "You can’t be spoon fed all your life.  In recent years, the Horseshoe has been so easy to find that you hardly even need to read the clues to find it.  If the frickin’ Mayor of Northfield can find the Horseshoe, what does that tell you?"  Other committee members agreed, though they wished to remain anonymous.

The Northfield Fire Department has agreed to rent out its diving suit to anyone interested in searching the river for the Horseshoe. "I know it’s a bit unusual but considering the City’s budget problems, we need all the revenue we can find right now," said Fire Chief Harry Frantek. "The bingo tent during DJJD ain’t the cash cow folks think it is."

In recent years, the downtown DJJD banners were hung by city street staff with no cost to the DJJD committee. But with the 2010 Community Events Policy, this changed. Community groups requiring support services from the City must pay for them.

So to save money this year, DJJD’ers found someone to donate the use of a boom truck. And last Sunday morning at 6 am, City of Northfield Streets and Parks Supervisor TJ Heinricy took off his staff hat and put on his volunteer hat to put up the DJJD banners with Hayes Scriven and Brad Ness. Nice.

I drove by the Peggy Prowe Pedestrian Bridge on Hwy 3 this morning and noticed that there was a banner hanging from it. I couldn’t read it from the highway but upon closer inspection, saw that it was promoting advanced DJJD ticket sales.  For what?  It doesn’t say, but I assume for the rodeo, to be held in the adjacent arena in Babcock Park.

I’m fine with the DJJD banner in Ames Park (right photo) since it’s just informative and that corner of the park has been traditionally used to promote non-profit community events using wholesale signs fabricators.  And I’m fine with Michelob Golden Light Draft and others (in this case, Econofoods and Community Resource Bank) sponsoring DJJD on their banners.  But I don’t think City property, especially parks, should be used for commercial advertising of any kind, let alone beer.

Would someone let Peggy know so she can raise some hell about this?

I love it how the Northfield Historical Society and the DJJD committee are sneaky smart. Yes, they make sure we celebrate the ‘defeat’ part of the Defeat of Jesse James Days, especially with tributes to Joseph Lee Heywood.

But we all know—wink-wink—that the outlaws are the real draw. Heh.

A special preview of the beer will be made available during the Northfield Historical Society’s Outlaw Run motorcycle rally on August 27.

Hopefully, Outlaw Run participants will drink responsibly (for me on a motorcycle, that means non-alcoholic beer) and no one will bungle their ride.

But let’s give props to both the Northfield Historical Society and the DJJD committee for increasingly finding more ways for people celebrate the true fun part of DJJD: mayhem!  And no, I’m not being sarcastic.

More progress: The new line of shirts on sale at the Rare Pair don’t use the word ‘defeat’ at all, just the phrase “Jesse James Days.”

The DJJD Committee ambushed Brett Reese at the Rueb today, informing him  that he’s this year’s recipient of the Joseph Lee Heywood Distinguished Service Award.

The award “… is given to a Northfield citizen who exemplifies the commitment to public service which Joseph Lee Heywood lived and died for.”

See my album of 16 photos, the large slideshow (recommended), or this small slideshow:

Info about Brett release by the DJJD Committee:

Which Northfield area organizations are giving a high/decent/respectable percentage of their charitable gambling proceeds to community needs and spending less on their operations?

Today’s Sunday Strib has a front-page story titled Where’s the ‘charity’ in charitable gambling? (That’s a premium link for the next few days, i.e., you need to be a print subscriber and logged in to access it.) 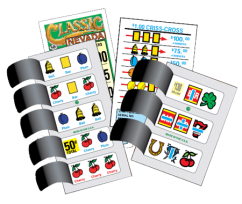 This year marks the 25th anniversary of state-regulated charitable gambling in Minnesota, the charitable gambling capital of the nation. Gambling employs more than 12,000 Minnesotans, funnels money to hundreds of charities, and provides entertainment at nearly 3,000 bars, fraternal halls and restaurants in every corner of the state.

But donations to charities have plunged to their lowest levels since 1986. About $32 million, or 3 percent of gross gambling revenues, went to charities in fiscal year 2010, according to a Gambling Control Board analysis this month. That means hundreds of Minnesota groups, such as Boy Scouts, softball teams and food shelves, are receiving smaller or no donations from gambling proceeds.

Hundreds of VFWs, American Legions and other groups have come to rely on their charitable gambling revenues to keep their doors open.

A third article (access is open to all) titled How much money goes to charity? has a:

… list of the more than 1,200 organizations that operate charitable gambling in Minnesota, which has been a $1 billion per year industry. They range from VFWs to fire department associations to youth athletic clubs. To sort by city or another column, click on the arrows inside each column head. The column titled "Other Lawful Purpose" refers primarily to property taxes and some building repairs that American Legions, VFWs and other fraternal groups can pay for using gambling profits.

I put together this screenshot of the data for the Northfield groups. Click to enlarge:

So let’s crowdsource the analysis of this data.

Which Northfield area organizations are doing well, i.e., giving a high/decent/respectable percentage of their charitable gambling proceeds to community needs and spending less on their operations?

And which, if any, are doing poorly?

The DJJD Committee ambushed Will Healy as he ate lunch at the Quarterback Club today, informing him  that he’s this year’s recipient of the Joseph Lee Heywood Distinguished Service Award.

The award “… is given to a Northfield citizen who exemplifies the commitment to public service which Joseph Lee Heywood lived and died for.” (See the screenshot of 2008 recipient Scott Richardson’s nomination letter on the right.)

See the album of 10 photos, the large slideshow, or this small slideshow: