Randy Jennings, Occasional Press, sent me PDFs of the new Northfield brochure that he created for the City of Northfield Economic Development Authority (EDA).

It is intended to be used as a take-away piece when Economic Development Director, Jody Gunderson, and others meet with business folks and investors considering moving a business to or starting a business in Northfield.

It’s a classy-looking, well-done brochure (and that’s not just because he used some of my photos). I don’t know how much it cost. Anyone?

END_OF_DOCUMENT_TOKEN_TO_BE_REPLACED

What needs to be changed with the City of Northfield’s web site?

I don’t know if the City of Northfield’s 4-year old website can be easily modified (that was the plan when it was created for $85,000) but it clearly needs improvement. So maybe we can help the City by listing the problems we encounter when using the site and making suggestions for improvement. (Although I do blogsites for a living, I would decline bidding on a revamp of the City’s site, just like I declined to bid on a revamp of the Northfield Area Chamber of Commerce’s website.) (continued)

END_OF_DOCUMENT_TOKEN_TO_BE_REPLACED 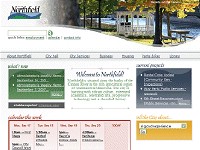 END_OF_DOCUMENT_TOKEN_TO_BE_REPLACED

The City of Northfield’s Municipal Liquor Store is hosting a wine-tasting event tonight at the Grand. The first one held earlier this year was fantastic and I hope to be…