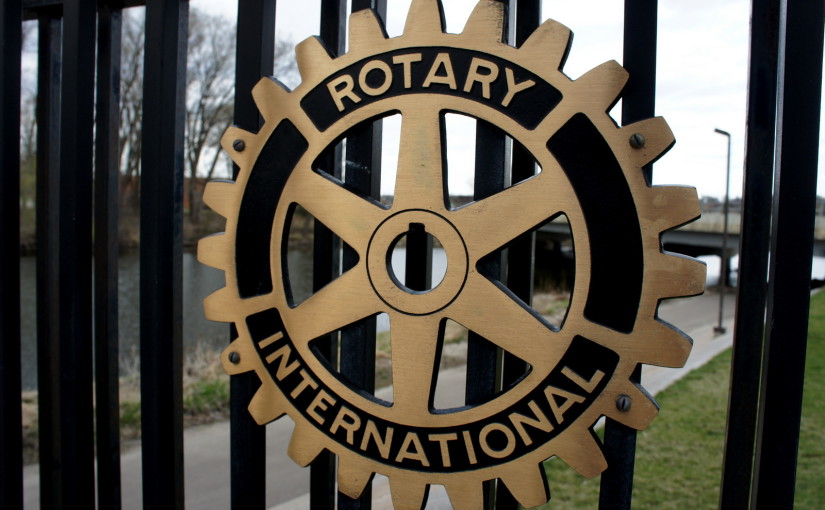 Rotary International and the Northfield Rotary Club‘s logo is a cogwheel (some background info here.) Northfield area bikers like me see more in it than that, especially when I ride across the Peggy Prowe Pedestrian Bridge to the Sechler Park Mountain Bike Trail, opened recently by CROCT (Cannon River Offroad Cycling & Trails) where I’m a board member. Thank you, Northfield Rotary, for all you do for bicycling in the area.

Someone has defaced the Peggy Prowe Pedestrian Bridge and the Mill Towns Trail pavement by the John Liebenstein memorial with hearts.

I drove by the Peggy Prowe Pedestrian Bridge on Hwy 3 this morning and noticed that there was a banner hanging from it. I couldn’t read it from the highway but upon closer inspection, saw that it was promoting advanced DJJD ticket sales.  For what?  It doesn’t say, but I assume for the rodeo, to be held in the adjacent arena in Babcock Park.

I’m fine with the DJJD banner in Ames Park (right photo) since it’s just informative and that corner of the park has been traditionally used to promote non-profit community events using wholesale signs fabricators.  And I’m fine with Michelob Golden Light Draft and others (in this case, Econofoods and Community Resource Bank) sponsoring DJJD on their banners.  But I don’t think City property, especially parks, should be used for commercial advertising of any kind, let alone beer.

Would someone let Peggy know so she can raise some hell about this?

The segment on 5th between Union and Washington (paved last year) does not yet have lanes.  5th St’s bike lanes extend to Water St. where they connect to the Riverside Park trail extension that was installed last year… and which connects to the Mill Towns Trail via the Peggy Prowe Pedestrian Bridge.

Are there other places in Northfield with bike lanes in which car parking has been restricted to only one side of the street?

Paving and landscaping on the Riverside Trail Extension between 5th St. and Riverside Park was completed this week.

The Riverside Trail Extension connects downtown with the Peggy Prowe Pedestrian Bridge over the Cannon River at Hwy 3 and then on to the Mill Towns Trail.

The $245,000 to construct the trail came from the City’s Master Development District Fund.

Update 7/12: I’ve added these two photos taken on 6/27 that show the signs urging people to walk their bikes around the corner.

Every time we get a substantial rainfall, the new retaining wall along the Mill Towns Trail (MTT) in Babcock Park (between the PPP Bridge and the Hwy 3 bridge) seeps water at its base and over the blacktop trail.

My degree in philosophy equips me to wonder whether this is a feature or a problem. It seems like water should seep under the trail and into the river. Discoloration is already evident. And as the weather turns colder, it seems like ice could build up there. That could make for an interesting challenge for walkers, bikers, skaters, skateboarders, et al. while the occasional mishap provides a boost to the local legal and medical economy.

See the album of 28 photos, the large slideshow, or this small slideshow: