Last week, members of Northfield Transition Youth/YES (Youth Energy Summit) who worked on welding downtown’s new combination recycling/trash bins stopped by my corner office at GBM for a photo.  And they brought a few photos of themselves welding the bins with Eco Gardens co-owner Howie Holt.

In the photo on the left (L to R) are high schoolers Arlo Cristofaro-Hark, Helen Forsythe, Antonia Cristofaro-Hark, and Cliff Martin. Not pictured: Avery Swearer.  Behind them are two of the many adults who were involved in the project: George Kinney and Mary Jo Cristofaro.

Back in July, I blogged about the arrival of the combination recycling/trash bins downtown.  Three commenters to that post told the story of how the project came to be. Northfield Councilor Betsey Buckheit wrote:

Northfield Transition Youth/YES developed the project to build recycling bins for downtown because, as Griff has complained, the plastic wheelie bins chained to the trash receptacles weren’t very attractive (and then they disappeared) and to encourage recycling. I believe they had a design competition, but their first design made of wood did not pass muster with the HPC. George Kinney was helping develop the project in its design/initial attempt, but I believe this was as a private citizen and not an EQC project.

The Downtown Streetscape Task Force was moving ahead to buy receptacles much like what has been created, but they cost $1500 apiece. Streetscape was willing, but that’s when Howie stepped in to say — Hey, we can do this cheaper here. I can teach kids to weld, we can cut apart old trash containers and “stretch” them with similar-looking slats. A bit more back and forth on this — keeping recycling dry is a big deal because wet paper, according to Joe Stapf, spoils the lot, so ensuring there were lids on the containers was critical. TJ Heinricy helped by providing old trash receptacles for creating a prototype. Streetscape Task Force worked out the details and is paying for the containers.

And, now they’re beginning to appear on the street. I understand from Howie that he’s got some great youth welding talent, too. The Transition youth, Mary Jo Cristafaro (another adult assistant), and Howie deserve a round of applause for their idea, persistence, and execution. Looks great; saves money.

Betsey, in addition to the much-deserving Joe Stapf and T. J. Heinricy, I think thanks, by name, are due to Bob Will, Chair of the Streetscape Task Force, Steve Edwins, Member of the Heritage Preservation Commission, and Betsey Buckheit, Second Ward Councilor, for walking down to Eco Gardens and checking out Howie’s prototype. They all went the extra mile (okay, maybe it was only half a mile) to give the local option a chance.

Although having a decision-making rubric is a great idea (it can promote fairness and efficiency), it would appear that sometimes it’s a good idea to add a little “common sense” or, for a lack of a better term, subjective valuation to the decision-making process. The decision had been made according to the proper policy/procedure and the process/organization was moving toward timely implementation when Howie basically asked, “Could you give it another minute or so?” and Joe, T. J., Bob, Steve, and Betsey said, “We can give it another minute or so”.

Understandably, it would be a challenge to municipal efficiency (in terms of time and, sometimes, money), if we essentially second-guessed every decision made by a public sector group or entity. However, in this particular example of a sometimes stumbling (or seemingly inefficient), and admittedly stop and go process, reviewing the decision, particularly double-checking both the explicit and implicit values likely to be used by the community to judge the results, before taking irreversible steps to implement the plan, resulted in a better outcome.

Well deserved credit goes to the stalwarts of Transition Youth/YES, Mary Jo, and Mera Colling, who worked on quite a few designs over the past year and a half or more — lots of prototypes, many false starts, and I think we are so happy that the final design received everyone’s approval. TJ and Howie really came through for the group — helping to find solutions and getting the process moving. It wouldn’t have happened without their help. The group received additional support and encouragement from Northfield in Bloom and Curt Saffle of Waste Management.

As far as the EQC is concerned, we’ve been pushing for permanent downtown recycling options for probably close to 10 years, with Suzie Nakasian being the champion for several years on EQC (and then Planning Commission).

Happy to have had a hand in it.

In August, Jordan Osterman at the Northfield News did a story: Northfield youth group leads the way on recycling in parks, downtown

Thanks to the leadership of a group of Northfield High School and Arcadia Charter School students, along with the help of the community, city workers are now in the process of installing what will eventually be 28 new recycling/garbage bin combos in the downtown area and parks where no recycling bins were previously available.

In October, high school student Logan Regnier produced a video about the project and it’s up on Northfield Patch: Youth, City Collaborate on New Recycling Bins 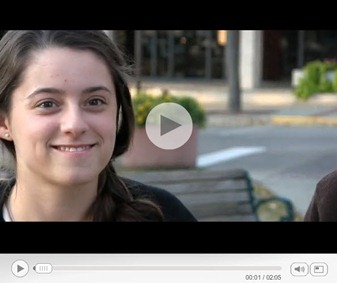 Officially, Earth Day 2012 was yesterday, April 22. But in Northfield, it’s being celebrated this coming Saturday, April 28, noon to 5 on Union Street between Third and Fourth Streets (outside First United Church).

Last week, Transition Northfield volunteer Mary Jo Cristofaro managed to convince two Northfield High School students, Helen and Antonia, to get up really early and meet me at my GBM corner office for a photo with the 2012 Northfield Earth Day Celebration poster (PDF).

See my Northfield Earth Day photo album slideshows from 2011 and 2010.

I stopped by ARTech last week to visit with two students, Arlo Cristofaro-Hark and Will Haslett. They and other students at the Northfield High School are members of Transition Youth/ Youth Energy Summit (YES) and will have a booth at next Saturday’s Earth Day Celebration in Northfield, 12-4 pm downtown.

I got this info via email but see the Transition Northfield Earth Day page and Earth Day Celebration poster for more: 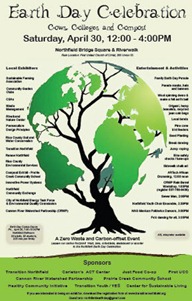 Local exhibitors include Transition Northfield, Just Food Co-op, Cannon River Watershed Partnership, Waste Management, The Sustainable Farming Association, Rice County Soil and Water Conservation, Innovative Power Systems, Community Supported Agriculture and many others! If you are interested in being an exhibitor by sharing something sustainable that you are doing- down load the registration form at www.transitionnorthfield.org

Enjoy break dancers, music, and local food.  There’s something for everyone! This is a zero waste and carbon-offset event.  We encourage you to walk, bike, or rollerblade down to the river. Rain Location: First United Church of Christ- 300 Union St.

And for more about the ARTech greenhouse in the photos above, see:

Transition Northfield, got moved indoors to the Armory when morning rains axed the planned Central Park location. But sun poked through by mid-afternoon and the non-booth activities moved outdoors on Division St. On the right: my favorite photo.

See the album of 26 photos, the large slideshow, or this small slideshow: